By becca - August 02, 2011
Last week, Project Runway Season 9 premiered. You can read our recap and the reviews of the top and bottom designers. Sadly, we don't get to hear what the judges have to say about the other 10 designers. Their designers were varied and interesting. Overall, I think they made a strong showing with several looks that could have deserved the top spot and only a few in danger of the bottom three.

Kimberly was one of those in danger of the dreaded bottom group. Her pants could have been worse, but the idea behind them wasn't great. Plus, they clearly didn't fit. The vest/top/boob-hiding scarf thing baffles me. I don't get it. She's just lucky other looks were worse so she didn't have to account for that mess. 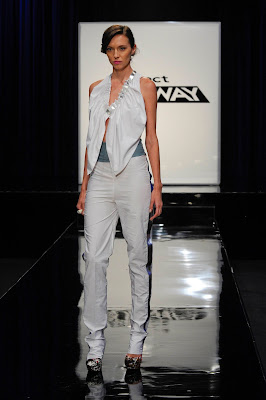 Joshua M. should have either left the vest off or rethought the rest of the pieces. I think the vest could be interesting on a better look, but here it looks like a game of "one of these things is not like the other." It just doesn't flow. Perhaps he ran out of time to dye it. Also, without the vest the outfit looks bland, and the proportions are off. The top seems too long for a crop and too short for the skirt. Or mayby the skirt isn't low-slung enough, which would account for how short it is. 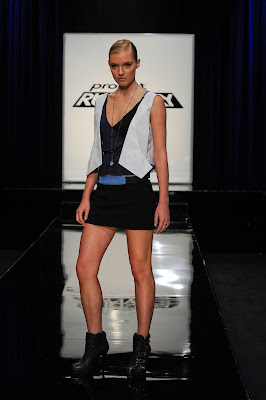 Cecilia had a cute idea with a bubble skirt and bandage top. (I'm not sold on the shrug.) However, her execution missed a bit. The bubble skirt was riding up before the model even got to the runway. I'm shocked she wasn't tugging it down the entire time she walked the catwalk. I think the top might be super cute, but it's hidden by that limp shrug. Also, the styling is a bit confusing. 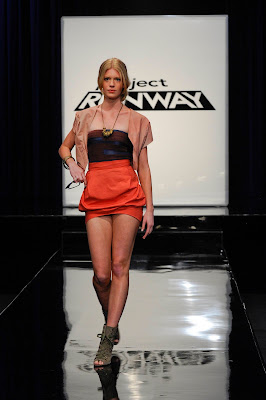 I liked Olivier's portfolio a lot even though it was all menswear. I did like this top and jacket, but they looked a little unfinished and a bit boring. It's difficult to do the kind of detail work that seems to be his specialty with the time and material constraints of Project Runway challenges, but that's part of the game. I hope he can figure out how to turn up the volume on his looks without losing his menswear-inspired style. 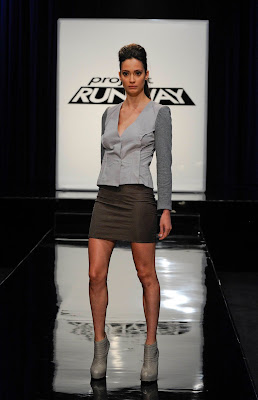 I love a fitted skirt and voluminous top, which is why I'm pretty fond of Bryce's look. However, the shirt seems a little wonky and the skirt is too short. Also, the look is a bit plain, but on the first episode it got him by. 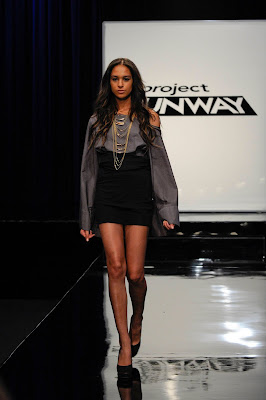 Becky seems like fun, and so does this dress. I like the vivid color and the fun print strip down the front. I also like the button and string detail on the shoulder. She mentioned being worried about the color, and judging from her styling she was hoping this dress would work for someone older and maybe as a cocktail look rather than a day look. The color pulls it a bit more toward day and makes it more youthful, but I think a change in styling would have made it so no one questioned the color, including the designer herself. 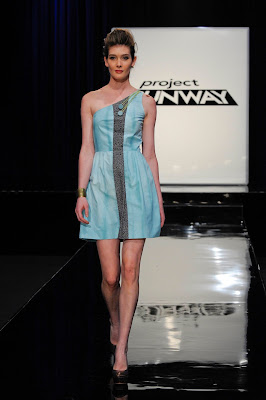 Danielle walked off the runway and immediately huffed about not making it through. It seems she expects herself to be the best every week. I'm not sure if that's because she has a high opinion of herself or puts unrealistically high expectations on herself. Her look was cute and well executed. I liked the mix of colors. It all looks both stylish and comfy while fittting with her aesthetic. I don't think it merited a top spot though. 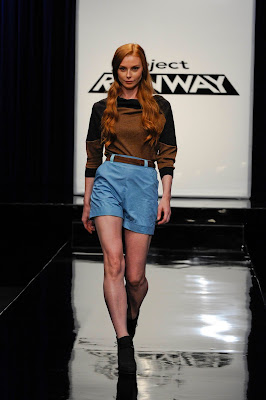 Fallene won me over the minute she said she was going to use her shirt graphic of a clown puking rainbows into a toilet. She made a fun dress that had a bit of circus vibe and showcased her clown. Julie ended up in the bottom three for not using her childish pajama pants well. Fallene could have easily left the clown off and not worried about it, but she took the chance to embrace the weird, childish bit of her pajamas and make something fun. I do wish she would have had a bit more fun with the styling and a bit more volume in the skirt, but I still like it a lot. 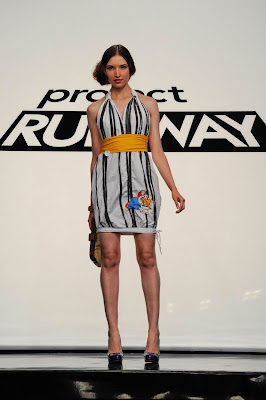 From a personality standpoint, I don't think I'm a Laura fan. At least not yet. But I do like this look. Her pants could have fit a bit better, but I like the tie dye she did on the white sheet to make the fabric blend with the delicate silk top. She used the lace well on the sleeves and actually did a good job making the crop top work with the high-waisted pants better than I'd like to admit. 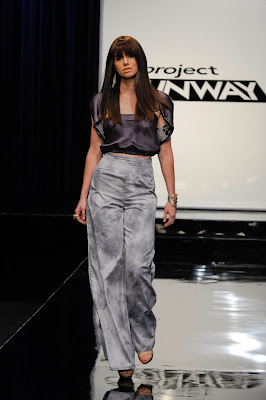 I want Viktor's dress. I might need it. I'm certainly in love with it. It's vintage inspired, amazingly well tailored and I love the placement of the black panels, stripes and bold buttons. I really want this dress and I'm a bit surprised it didn't earn a top three spot. Did I mention I want this dress? 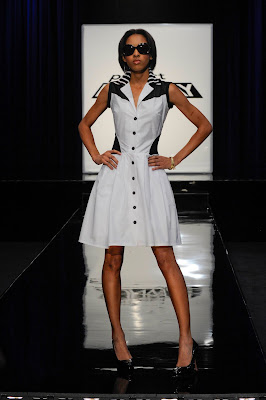 Who were your favorites of the other 10? Do you see any top contenders yet? Who do you think won't last much longer?
Photo Credit: Barbara Nitke, Mylifetime.com
Project Runway

Rachel said…
I also said "I want Viktor's dress!" whan I watched the opisode! I also really liked Fallene's and Becky's. Super cute and I was a little surprised not to see any of these in the top 3.
August 3, 2011 at 12:54 PM

Anonymous said…
I really think Kimberly should have been in the bottom three, what was she thinking? I really liked Bryce and Laura's looks awell
August 15, 2011 at 12:54 AM