Book Review: The Illustrated Encyclopedia Of Costume And Fashion: From 1066 To The Present 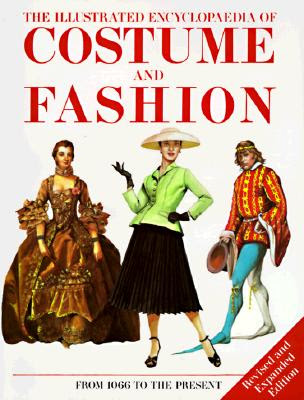 Book: The Illustrated Encyclopedia Of Costume And Fashion: From 1066 To The Present

Pros: Used copies are under a buck.
There's a glossary of terms in the beginning.

In addition to covering a lot of history, this book also includes the clothing of the rich and middle class, and comparisons of clothing for day, evening and activities.

If you like historic dress but aren't sure exactly what you like, this book will help you narrow down an era. 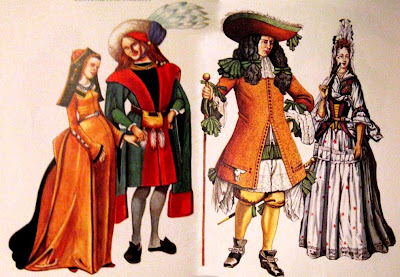 Cons: Many of the illustrations are ripped off from famous paintings, and the illustrator's skill runs from passable to bad (Note how the men in long coats below both have their hand hidden. We won't talk about the strange potato faces above.).

The author doesn't talk about what made certain styles popular. He just described what the subject is wearing. Each image then feels like it could be an outfit in isolation, like if someone only had a photo of Boy George to define the entirety of 80s attire.

A pro and con, the trends in men's fashion are more interesting than the women's. I felt the ball was dropped on women.

Favorite tidbits: People have been showing revealing glimpses of their underwear for hundreds of years.

It's astounding that men wore hose from the 1300s until the invention of pants in the late 1700s. Without elastic, those things had to have been murder to keep up and in shape.

Women in the Rococo era wore masks with their outerwear. Makes you thankful for the invention of scarves, does it?
In the Italian Renaissance, people used decorative chains to attach the toes of their long shoes to their knees. This makes Crocs look downright chic. 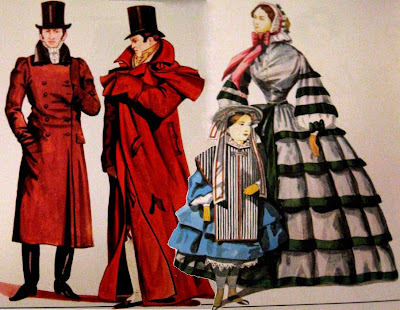