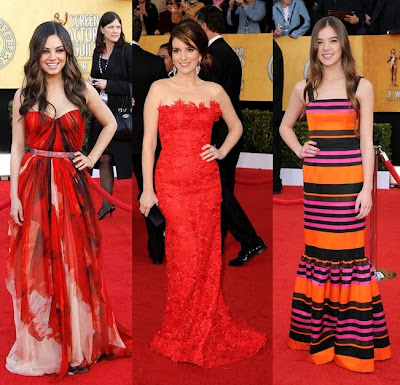 Fire tones burned up the red carpet at the SAG Awards. Who couldn't love a girl in a McQueen dress? Mila Kunis wore this flowing McQueen gown, which managed to convey both dressy and laid back vibes. I just want to borrow it and twirl. Tina Fey usually sticks to black and blue so her red lacy Oscar de la Renta number both shocked and stunned. Newcomer Hailee Steinfeld, of True Grit, lived up to the task of being fashionable, age-appropriate and original all at the same time in her bright Prada gown. It's a lot to ask of a 14-year-old, and she pulled it off. 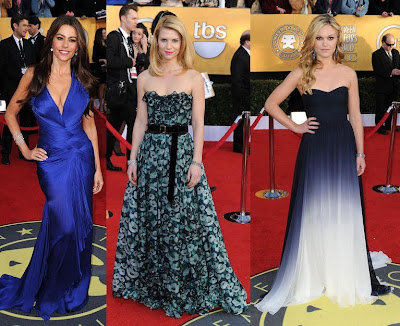 Sofia Vergara's Cavalli stunner walked the thin line between fabulously sexy and too sexy, but the vivid blue on her amazing figure made the Modern Family star look lovely. Also, the fit and structure of this dress are just astounding! Claire Danes got some flack for her floral Louis Vuitton dress. I thought she looked darling, light and a little (but not too) casual. She looked like she was having fun in the dress. I like Julia Stiles, and find myself cheering for her. Her Globes dress was a let down, but she's taking a step in the right direction with this ethereal blue dress. The ombre gives a pretty twist to the classic sillhouette. 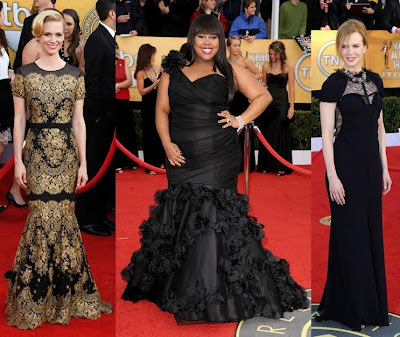 Black is a red carpet standby, but can easily be boring. January Jones never bores on the red carpet. She wore this demure gold and black Carolina Herrera dress, which was a stunning contrast to her terrifying and too revealing Globes dress. Amber Riley keeps hitting fashionable high notes this awards season. In fact, this dress landed her on top of several best dressed lists. I'm a bigger fan of her Globes dress, but both looks are lovely and bold. Nicole Kidman's dress had a lot going on. The collar, the lace, the cross at the neckline, the little bow just above her bum, the sleeves, the sweetheart neckline, the necklace...you get the idea. No matter what anyone else says, I loved it. Sure, the Nina Ricci dress was a bit much (and I might have left the necklace home....maybe), but it was fun, interesting and bold. Nicole's Globes dress make me totally forget she was even in attendance so an outstanding look was in order.

What was your favorite SAG dress? What do you think of our top picks?
celebrities

Jael Paris said…
I hate Nicole's dress. Hate. Not only is there too much going on for her, it looks itchy and the boobs don't fit correctly.

Betty said…
I love how Claire Danes looked and I don't understand why she was getting so much flack for it. That's a beautiful dress!
February 1, 2011 at 9:03 PM

becca said…
Diana Agron was wearing Chanel Haute Couture, which means Glee is getting crazy love from designers. I liked the dark colors and smokey eye.

Jennifer Lawrence pulled off the Barbie pink, but I'm not sure how much I like the dress itself.