Helena Bonham Carter never has a problem with blending into the background, but I'd like to get her in something so her yet Best Dressed worthy. (Vogue Best Dressed not E! Best Dressed. Those people have no appreciation for personality.) This hyper-curved brocade dress from fellow Brit Roksanda Ilincic is just the sort of thing fashion nerds go nuts for while most people will just question if you're nuts.

Julia Stiles was fantastic and heartbreaking on Dexter. It's been a while since she's been a red carpet fixture. It's been so long that when I think of her style, I think of 90s minimalism. J. Mendel's tangerine dream has gentle gathers and classy lines. While it may be predictable on other women, I'd love to see Julia embrace old school glam and punchy color. If she's color shy, this velvet gown from Gianfranco Ferre is plenty sexy and has enough detail to repel that 90s minimalism vision. 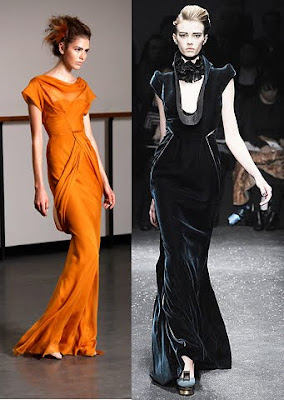 Elisabeth Moss is always being overlooked by the glossier women of Mad Men. Seeing as she's the only woman of the cast with a nomination this year, go for broke. There's no way she'll blend in on her big night in this sequin, asymmetrical shift by Naeem Khan.

Back to her resplendent red hair, Nicole Kidman now needs to break up with white (although the red does keep her from looking like death). She looked so great when she wore this peacock dream and this amazing ode to chartreuse. She usually wears long gowns, but I'd love to see her in this red cocktail dress by Alexander McQueen. If she's still stuck in neutral, this Dolce & Gabbana dress from their 2006 collection is right up her ally with beautiful texture. 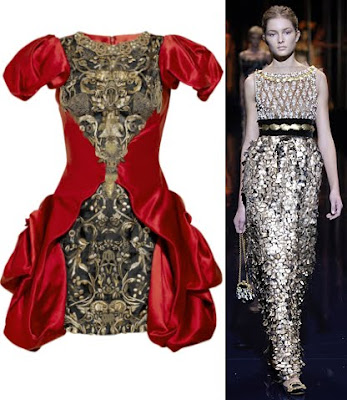 Speaking of stuck in neutral, Angelina Jolie is in a caftan rut. Since there's little hope she'll go for one of the wilder looks we'd love her to rock, I'd like to at least get her in a color. This Lanvin gown is blousey as she likes, but the rose color would be a breath of fresh air. Since there's little chance she'll move on from the caftan, I can at least hope for this yellow trimmed Chris Benz number. 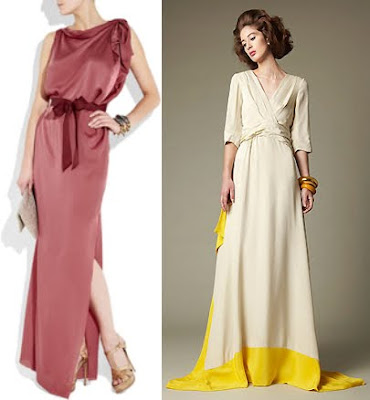 Rachel said…
I always enjoy these posts, and the follow-ups even more. I'm anxious to see what they'll actually wear compared with your picks.
January 12, 2011 at 8:24 AM