By Jael Paris - October 21, 2010
I was slightly obsessed with the clothes in Japan. Half of my photos may be snapped-on-the-sly style shots, but I'm not confessing to anything. Here's what caught my eye:

After looking at a few blogs*, I realized several of the trends I spotted were actually elements of the "folklore" look that's been popular in Japan for a few years. Here in America, we may think of it as a country prairie style. It generally involves small floral prints, fringe, table cloth lace, shearling trim and furry vests.

Japanese Street Style: Antique by Fashion Me Fabulous featuring a straw hat
Knee Socks As a nation with a solid appreciation for the value of the uniform, it shouldn't come as a surprise that knee socks were everywhere. They ranged from regular to slouchy to sheer. I saw sock shops everywhere, but waited to stock up until my last day...when I couldn't find a sock shop.

Excess Rhinestones on belts, on shoes, on bags, on phones, on earrings, on hair bows, on eyelashes. There is nothing in Japan that can't be further blinged. Fur is its own best accessory so pair fur boots with a fur trimmed vest and fur bag. And just because you're wearing two necklaces doesn't mean you shouldn't wear four bracelets and three rings. There's no such thing as too much makeup as "too much" can only make you look more doll like. 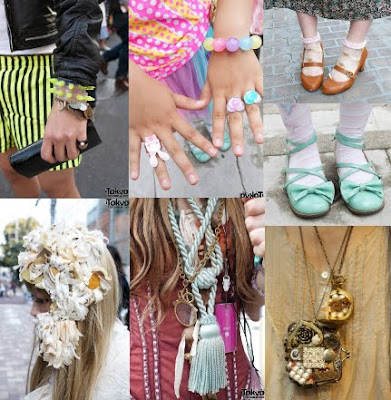 The Eyes Have It While street style blogs feature plenty of girls with bold lips, most of the women I saw stuck with mauve, brown or a simple gloss. The eyes were where the show was as. Not only did many women wear long false eyelashes, but they also seemed to favor bright swipes of liner.

Berets Hats are very popular in Japan with the beret ranking at the top. Pair them with thick bangs and long lashes for maximum wow. 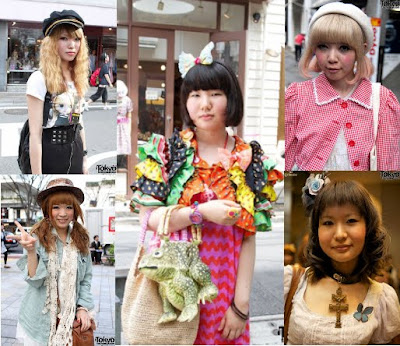 Mid-heel Shoes While shopping for clothes was a wee bit difficult, I happen to have fabulously Japanese-sized feet. This was thrilling because not only are the shoes extra cute, but they tended to have heels around two inches. Can we bring the rebellion against four inch monsters State-side?

Japanese Street Style: Girly Girl by Fashion Me Fabulous featuring vintage clothing dresses
Layering Prints I can't even describe the awesomeness of the print mixing. While we were prepping for our trip, we watched a few documentaries about Japanese history. I noticed lots of wonderful print layering in the old art featured, so I think I may just have to communicate it in an upcoming Polyvore post.


*Tokyo Fashion, where I pulled the street shots for my collages, is especially great for those of us who don't speak a lick of Japanese.
trends