By becca - October 22, 2010
Last night was the always delightful Tim episode! There wasn't enough Tim time this season (even with the extra half hour of show) so I was really sad to discover how short Tim's visits were. Even though it was light on Tim, the editors didn't leave out the emotional, tear-jerking stuff. 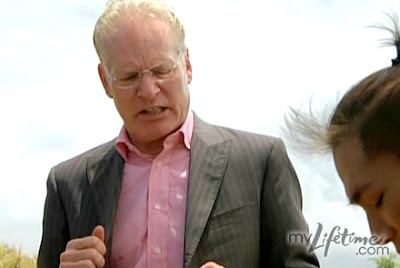 Tim's visit to Andy provided the best Tim moment of all the visits when Tim recoiled and shrieked at the sight of the catfish Andy's family raises. Amazing. We also learned that Andy's mom is crazy supportive and seems rather proud of her son no matter what he chooses to do. Awww. Sweet. Andy's collection was in rough shape when Tim saw it. He was drawing his inspiration from Laos, his family's home, and decided to source all of his fabrics from Laos. They had just arrived before Tim did. He did have some impressive headpieces to show Tim. However, Tim was far more worried about him getting his clothing done than how cool the accessories were. (Pictured: Tim reacting to catfish) 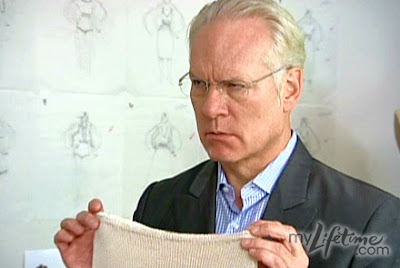 When Tim visited Gretchen, we saw her in the kind of humbling situation we wouldn't even wish on Ivy. She returned from the taping of Project Runway to a broken heart and empty bank account. It seems in losing her relationship she also lost her home and had to deal with moving while making her collection. Gretchen pulled together earthy, tribal/folk themes for her collection. Tim worried that Gretchen didn't have enough wow-factor. (Pictured: Tim disaproving of Gretchen's "diaper" pants). 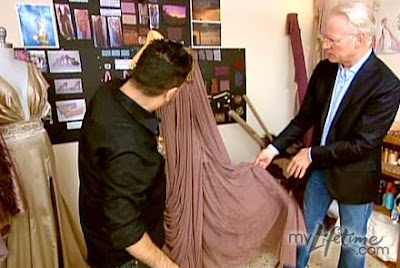 Tim's visit to Michael C was also a bit sad. We learned that cheerful, forgiving, kind, emotional Michael has a family that disapproves of just about everything about him and never believed he could make it as a fashion designer until he got on the show. I don't know how this guy didn't crack under the pressure the other contestants put on him if he's been dealing with people telling him he can't do this his whole life. He must have some real confidence and determination to keep at it. I wish that showed more in his clothing. Michael C took his inspiration from feathers and how they look and move. Tim told him to stop creating so many looks and pick a few to focus on. (Pictured: Tim and Michael looking at a pretty dress). 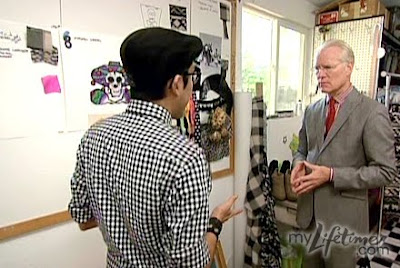 Mondo has neon pink walls in his house, and Tim seemed like such a proud papa looking over Mondo's collection, which was inspired by the circus and the Day of the Dead. Tim did find one piece that looked too junvenille, but the rest was in great shape already. Mondo's visit was by far the shortest. And we got to see plenty of determination from our favorite little designer, but we didn't meet any family or friends. Sad. (Pictured: Tim and Mondo discuss Mondo's inspiration.)

Sadly, we only got a little Tim time because the designers had to go back and face off with two of their looks plus one new look they had to make quickly.

Mondo's collection already looks like the clear winner. It's smart. It's fun. It's stylish. It's Mondo. Nina didn't like the long polka dot dress, but Heidi really did. In fact, Nina just seemed to think Mondo should make boring clothes and ignore his circus inspiration so people wouldn't think his stuff was too weird. Boo Nina! I want fun fashion, and Mondo is the only one who delivers. He was the first through to fashion week. 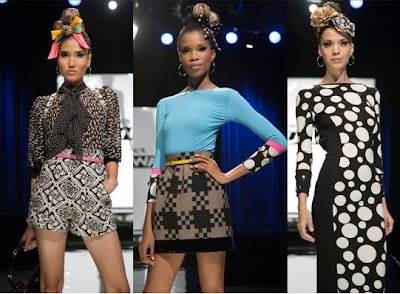 I knew Mondo was going to be in and really thought it was anyone's game to get those last two spots at fashion week. I even started to think it was possible for Gretchen to go home. I didn't care for her collection. It wasn't special or interesting or anywhere near her best work. Nina clearly took crazy pills before the runway show because she liked the side boob and granny panties look topped by an open leather blazer and fedora. Huh? At least she called the collection granola (a hundred times) so she hasn't completely lost her mind. I don't think Gretchen's collection earned her a spot at fashion week, but the judges like her so she got one anyway. 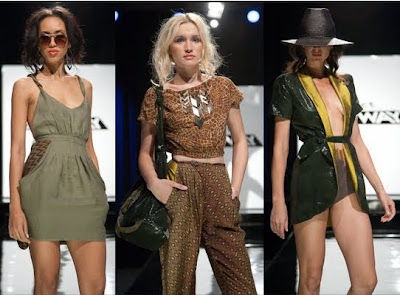 Andy nabbed the last spot. I'm happy to see him at fashion week, but I'm not sure his collection will live up to my hopes for him. He did not do a good job selecting pieces to show the judges. The bikini with a cape/tummy veil was a bad idea, and he'd do well to cut it from his collection. I like Andy, and I liked his pleated look, but I'm worried that the rest of his collection won't wow me. 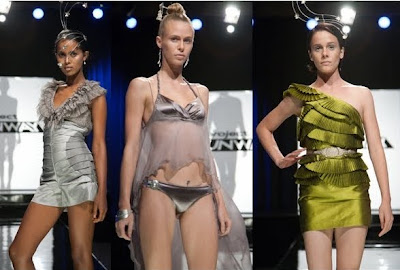 I never expected Michael C to make it to fashion week, but a part of me hoped he would. I wanted him to be able to show the other contestants and his family what he did. (Of course he did show as a decoy collection). I liked the fringe top and so did Heidi. The idea of the feathered skirt is good, but the proportions were off. The judges complained that it was all the same color. He didn't select the best range for his mini collection, but the new dress he made was rather stunning. Plus, I thought it was a good idea to show pants and bling and feathers since he didn't do much but pretty dress during the challenges. 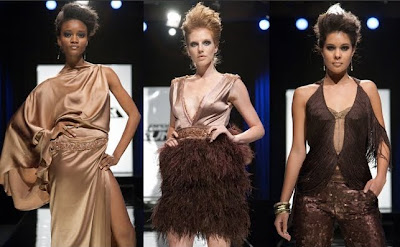 Seeing Michael C try to handle elimination was heartbreaking. He couldn't hold it together. Tim finally came in to cheer him up and was able to help him pull it together. Tim also let out his first ever f-bomb on the show to join in Michael C's rallying cry. I never though the use of profanity could be so endearing.

What did you think of the collection so far? Is Mondo a sure win or could the judges craziness mean a win for Gretchen? Do you think Michael C deserved a spot in the top three? And most importantly, will you be joining us as we live blog the finale next week?
Project Runway

Anonymous said…
Michael C deserved a spot far more than that boring Gretchen. I have never understood the judges fawning over some of the fugliest outfits I have ever seen. To me she makes ugly clothes, and has an ugly, mean personality.

What the he-- were the judges drinking?

That pants outfit of Gretchen's has to be one of the ugliest things I have ever seen. The whole thing looked cheaper than cheap and the fit was awful.

Wasn't too fond of her 3rd addition. What woman wants a dress to make it look like her butt is wobbling all over the place?

Mondo's been the clear winner for weeks. If Nina dogs on his quirky, cool, super-Mondo aesthetic, she must hate Betsey Johnson.
October 25, 2010 at 6:00 PM