By becca - October 19, 2010
I spend each day of every fashion week looking forward to the end of Paris Fashion Week when I can sit down and flip through the incredible clothing, intricate stories and impressive ideas showcased by the Japanese fashion designers. This fashion stitches itself into my brain and never loses it's vividness.

Junya Watanabe's collection featured styling so unsettling that each look shape-shifted as I looked at it. The blank doll masks gave the entire collection an eerie and ghostly quality. Who were these figures? Jailbirds? Extra's in Where's Waldo book? Sailors? The ghosts of fashion past?

The vivid hair suggested some personality to go with each look, as did the diverse collection of hats, but the masks created an upsetting sameness.

The collection had a decidedly nautical bent, but the masks keep me from seeing the whole lot as sailor clothes. Individual pieces are quite wearable for Watanabe, but the overall effect is stunning and avant-garde. 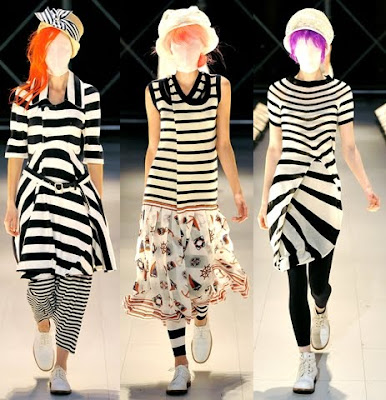 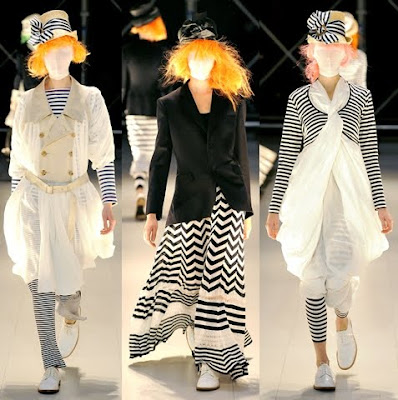 Yohji Yamamoto didn't go so far as to send masks down the runway, but he did opt for almost Kabuki-like white faces on the models. This collection apparently paid homage to Jimi Hendricks, but didn't sacrifice Yamamoto's signature Edwardiana to incorporate any 60s style. Instead, the middle of the collection burst into a haze of psychedelic prints paired is Yamamoto's ever-present black. This was about the feel of the music--the swirls of vivid visions on a dark and haunting background.

This may not be my favorite Yamamoto collection of all time. However, Yamamoto's final look proclaimed "This is Me" over and over. Indeed. This is him. (And the inflatable skirt seems to suggest that declaration is keeping him afloat). 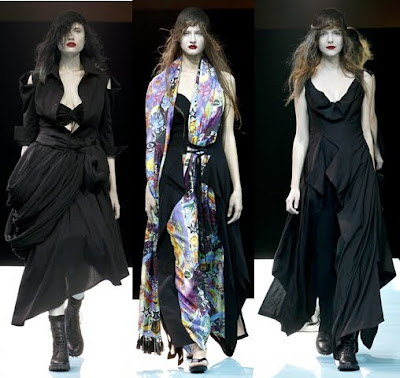 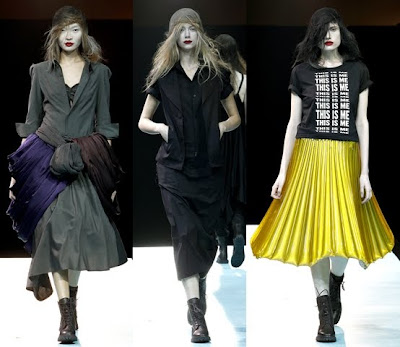 If Rei Kawakubo, the woman behind Comme des Garçons, attempted to make an average collection of wearable jackets, coats and dresses, she would certainly rip it all apart and put it all back together in this frenzied, yet inspired, reconstruction.

Kawakubo moved beyond simple deconstruction and reconstruction to reference multiple personalities--as if embodying one style wasn't enough so each look had to tackle several. As much has chaos seemed to reign, the collection held itself together and emerged cohesive and beautiful. 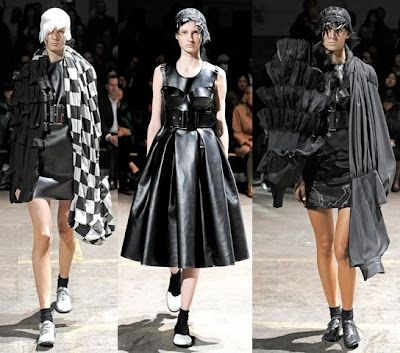 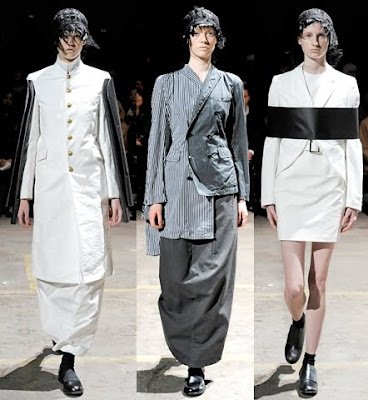 Issey Miyake summoned something ghostly, otherworldly and effervescent in this collection. Amazing techniques made the often simple pieces in the beginning haunting (in a light way). The second half of the show explored textures and prints that broke my trance a little, but left my enchantment in tact. (According to Style.com, the show launched with a voice over from Alfred Hitchcock. Hearing him in the beginning would have started the show off with much lighter mood. I'm still looking for a video). 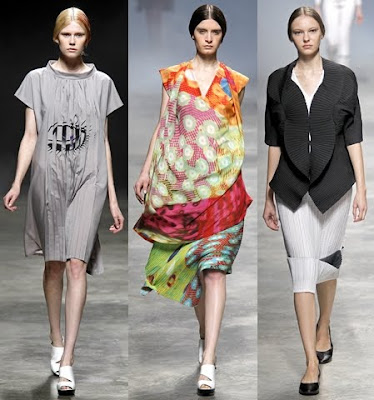 Tsumori Chisato is celebrating her 20th anniversary with her favorite things. These favorite things are apparently all from a trippy version of a Lisa Frank-obsessed five-year-old's coloring book. This is one Japanese designer who embodies the fun side of Japanese style rather than the spooky, dark side we see most often.

In an effort to be cool, edgy and forward thinking, fashion often forgets the pure joy of fun clothing. Chisato brings to life a playfulness and spark too often absent from the world of high-fashion. The colored on prints are perfectly childish, yet completely appropriate for any grown woman. Leopards, butterflies and clouds evoked childhood and imagination in the best possible way.

These clothes aren't just the over-the-top playfulness usually worn only by pop starlets (though there is plenty of that). Many pieces possess an unexpected timelessness without being stodgy, boring or the same. I'm looking forward to this line's next 20 years. 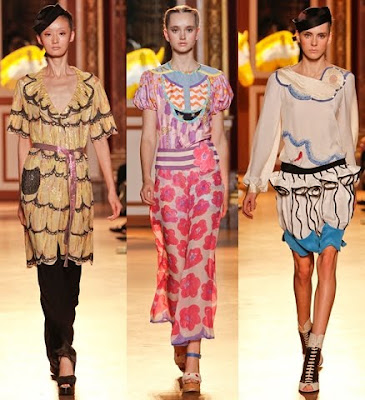 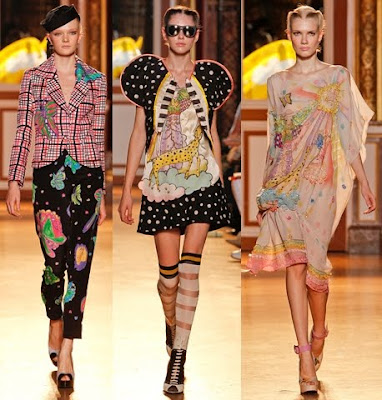 Gaëlle Pfyffer said…
Thanks for this post! It's nice to see fashion shows from different countries!
October 19, 2010 at 2:11 PM

Sarah Dee said…
I love the Yamamoto collection!
p.s thought id mention because i thought it was weird. Gale (who commented above) is my boyfriends brothers girlfriend! I didnt even know we read the same blog! weird ;)

Traci Marie Wolf said…
Great post! And great commentary. Watanabe's collection reminded me of the 80's although not in the usually way since it was nautical themed. Hmm, interesting. I think I loved Chisato's designs best. I am a fan of color and whimsy. To me, they look like watercolor paintings.
October 20, 2010 at 12:19 AM