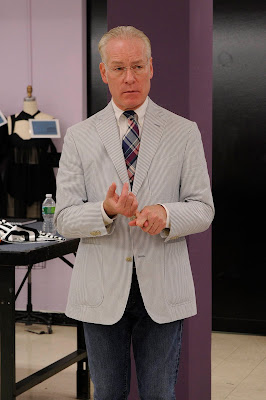 Last week's Project Runway challenged the designers to create an American Sportswear look for today inspired by the timeless style of Jackie Kennedy. Halfway through the episode Tim came in to challenge the designers to make outerwear for their looks and shuffled them off to a second trip to Mood.

Before we go any further with this post, lets talk about sportswear and what it is. Sportswear is a bit tricky to define since it is essentially easy-to-wear and laid back fashion that can apply to casual, business and social settings. It's a bit easier to say what it is not. It is not couture. It is not gowns. It's not really cocktail dress, but it can be since LBDs can fall under sportswear. It is also not active wear such as sneakers, yoga pants and gym shorts. Much of what we wear as weekend wear and work wear would fall under sportswear. Or everything that isn't in the fancy dress or workout wear sections of the store. Think Calvin Klein, Diane von Furstenberg, Ralph Lauren and Donna Karen.

Gretchen was safe this week. Her outfit wasn't bad, but it was far too loose and unstructured to bring Jackie Kennedy to mind. I have a hard time remembering this is the woman who won the first two challenges. She seems to lose a little something each week. Perhaps she should spend less time giving advice and more time making clothes.

I don't have a lot good to say about Michael C this week. The dress was nice enough, but on it's own it wasn't really sportswear. Without the jacket, the dress has serious potential for wardrobe malfunction. The proportions were way off on the pairing of these two items. I hate to rag on him because the other contestants have done it enough, but he needs to work on starting with a good idea and executing it well instead of creating seven looks before sending the one he hates the least down the runway. He won't be long for this competition if he keeps that up.

April's look was hard to see on the runway because it was all black. The look was a little more fitted than I'd imagine on Jackie, but she did great pieces like the pencil skirt with some interesting detail. Even though her look wasn't earth shattering or crazy innovative, I thought it deserved a top three nod over Christopher's cocktail dress under a dead animal.

Speaking of Christopher, it was hard to tell which way the judges were leaning at first. They loved his not-really-sportswear dress, but loathed this dirty dishrag shrug. They also didn't like how the two necklines worked together, but they seemed to give him special consideration since the jacket was sprung on him (consideration they did not extend to Valerie). The dress was nothing special and the shrug was killing the whole thing. I'm very confused when this passes for top three (and when it passes for sportswear).

Ivy earned a rightful place in the top three this week with a unique blouse and a chic pant. I liked the neckline on the blouse and the subtle color blocking. I also like that she chose to make a sheer jacket. However, I did not understand the wonky neckline of the jacket when it was closed. Her best showing yet by far. (See what happens when you mind your own business and get to work?).

Mondo was the clear winner of this challenge. He did a great job of capturing what Jackie Kennedy might wear today if she let Mondo dress her. He fit his exaggerated style into chic tailoring and classic shapes. He also showed off his sewing and finishing skills to make a very expensive looking outfit. The judges offered nothing but praise for the adorably strange little designer. I am so glad to see him get a win and such a deserved one. 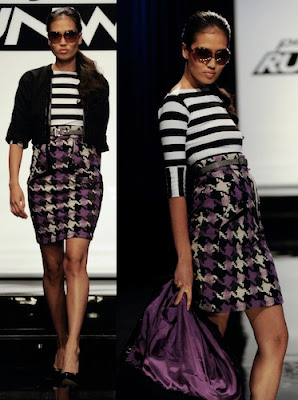 I don't not understand the judges hate for Valerie's look. It was very Valerie and not entirely Jackie O, but it was sportswear and fairly cute sportswear at that. I do wish she would have gone with the pants she was working on over the little skirt she chose to make. They were understanding when Christopher had to make outwear for that dress (not a difficult task really), but had no sympathy for Valerie's jacket/blouse that she rather smartly chose to cover with a vest. I didn't understand the hate or why it was in the bottom over, say, Michael C.

Andy seemed not to understand the challenge. Yes Jackie was a risk taker, but the challenge was about American sportswear not Japanese street wear. Andy has the disadvantage of being from Hawaii and rather disconnected from the idea of American Sportswear. Still, he is a very talented designer and could have come up with many things better than this. As much as I liked the idea of the pants, they aren't really classic American sportswear and, on top of that, they didn't fit. He also made a simple white shirt and sweater shrug vest I could probably buy at Kohl's. He deserved his bottom three spot, but I'm glad he didn't go home.

I'm sad to say it, but Micheal D deserved to go home. His outfit was a mess. It didn't invoke Jackie at all. The skirt started cute on the dress model, but became a proportional mess on the model. The Chanel-esque sweater could have been chic, but it just missed. His idea of a "top" was way off. I really liked a lot of what Michael D has done this season. I like his ideas and risk-taking. I was very disappointed to see him out, but he deserved it.

Did you agree with the winner and loser this week? What about everything in between? How did everyone feel about Valerie and Andy's looks? Who else is thrilled to see Mondo get a win?
Project Runway

Anonymous said…
TOTALLY thrilled for Mondo. So deserved, and love him, root for him! It would be so fun to see his collection at Bryant Park.

Am also relieved to agree about the loser this week. I was so disappointed about the loss of Casanova last week! I can keep watching without as much misgiving now.

I consider it a much better episode than last week. Although I am disappointed that Andy was so off base. I didn't expect that. I have been expecting to see both him and Gretchen at Bryant Park, but if both keep downward spiraling, it could be anyone's game.