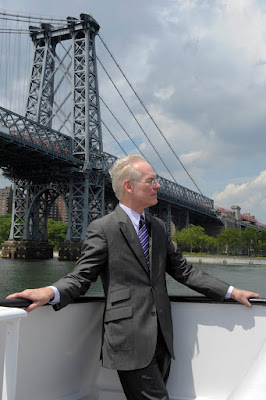 Project Runway really wants to make those designers work like crazy. Last night, they treated them to brunch on a boat so they could be inspired to create a resort wear look that expressed their point of view as a designer. Of course, they brought their sketchbooks along so they could work during this.

Michael Kors, a great resort wear designer, gave the assignment to create the looks and gave the designers each a pair of sunglasses to promote his eyewear line as a gift. After the boat ride and a trip to Mood (where Swatch the dog helped with the five minute warning), Tim came to the workroom with the feared velvet bag and uttered the terrifying phrase "gather round."

The twist: The designers would be working as both designers and sample makers. They would be paired up so the other person would create their look while they provided design instruction. This is a brilliant challenge because designers rarely create their own work once they really start doing business. They have to be able to communicate with sample makers to get things done.

The Teams: No one got to choose teams, Tim simply started pulling names out of his bag of tricks. The teams ended up oddly well matched.
Michael Kors and Tim did the critiques together. I loved that one of the judges stepped into the workroom so he could see what kinds of fabric choices and work patterns the designers have. He also got to see which ones take instruction and which ones don't. Also, these critiques gave the designers some idea of what to expect at judging since the judges have been disagreeing with Tim so much this season. (I was sad that this cut into our time with Tim last night though.)

Michael Costello has immunity this week, but went the extra mile to design a nice, beachy garment and put everything he had into Mondo's design. He was safe.

Gretchen made a very Gretchen look, but I didn't really get resort wear from it. I'm with Michael Kors that her color choices have been very boring. The front looks pretty nice, but the back is meh. She was safe.

Valerie's design was frumpy in front and kind of cool in back. It may have done better if Andy could have done it perfectly, but Valerie has some crazy tailoring skills that are hard to copy in that time frame. Also, the proportion of the shorts is off. She didn't hover or yell, she just let the man do his work and came out with a nice enough garment. She was also safe.

Michael D's look was my favorite of the night. I like the peekaboo bikini feel on an evening dress. Michael D has amazing ideas, but he doesn't quite have the construction skills to polish them in a day (few designers do). It was nice to see Ivy's handiwork on Michael D's dress because she works a lot faster. Although, she must the speediest designer ever because I never saw her do anything but pester Michael D. He was glad he didn't win because he felt bad about not doing as well on Ivy's look.

Andy's look was the most resort wear look and should have won. He made a swimsuit with an amazing cover-up that would transform the suit into a dress. It could be tied in a few places for different looks. Andy has the advantage of being from Hawaii and seeing resort wear all the time. He knows how to make a swimsuit. I really think he should have won. He did a great job instructing Valerie too. 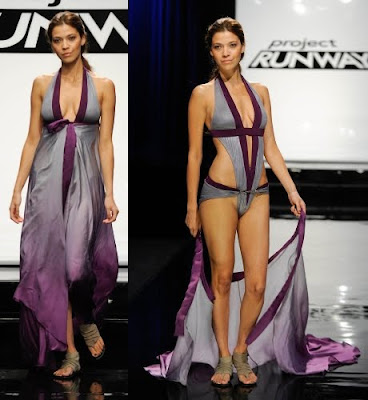 April won. I'm not sure I understand. This looks like a nighty with granny panties under it. The judges thought the "shorts" fit well. On TV they looked rather ill-fitting. April has this captured, mental patient on a crazy island idea of resort wear. I didn't understand that either. If anyone can explain why this won, I would love to understand.

Mondo was banished to the bottom three, but he stood by his design and Michael C's work. They judges complained that it looked too junior and that they could buy it at Forever 21 or Kmart. I agree that it didn't look special, but it was cute. It's Mondo's style. I see a lot of the things he makes as quite junior so I don't think a junior resort wear look was so bad. He was the first of the bottom three sent to safety.

Ivy proclaimed herself the bitch of the show a few episodes ago. At that time the award still went to Gretchen, but Ivy has fulfilled her prophecy and won her title. She stripped her design of everything interesting so she could badger Michael D. with sewing terms he didn't understand and hover over him making sure every stitch was perfect. Even if Michael D. had become the best tailor overnight, it wouldn't have mattered because the design was terrible. She should have stuck with her original design and let it go. Also, Michael Kors scolded her for poor fabric choice. She deserved to go home.

Instead, we must say goodbye to Casanova. I never thought I would miss him when he went, but his personality is quite funny. The judges called his look granny and outdated and not very resort. OK, but I do see a certain elegance in it. Also, standing next to Ivy's look at least illustrates that Casanova had a design. I knew Casanova wasn't long for this competition, but neither is Ivy. The judges nailed it when they said she doesn't seem to have good enough ideas to be a designer. She is simply a dressmaker. Even with his slut or grandma bipolar designs, Casanova indeed has ideas. I would have liked ideas and design to win out over bitchy and idea-less.

Casanova was a good sport. He mock mimed hanging himself because it was all over, but he didn't seem really sad at all, just a little dissapointed. Tim was sad to see Casanova go and proclaimed, ""What are we going to do without you?" to which Casanova replied, "I live very close from here." I think a visit from Casanova would be entertaining.

What did you think of the designs? Are you still waiting to be wowed? Which was your favorite and which should have won? Did you agree with the loser of the challenge? Do you want to hit Ivy as much as I do? Gretchen was a major player at the beginning; what do you think will become of her? Also, what do you make of all the palazzo pants?

Next week's challenge appears to be Jackie Kennedy inspiration during which Tim will utter the phrase "Jackie Kennedy would not have camel toe."
Photo Credit: Barbara Nitke/ Lifetime Television
Project Runway

Anonymous said…
I agree with you completely! I was SO disappointed that Andy didn't win, and that Ivy wasn't cut. If they don't cut her next week, I may have to take a week or 2 break from watching the show. I get that annoyed.

Kaye said…
Maybe I'm just crazy, but I didn't like Michael D's at all. I was shocked that he was in the top. Ivy just needs to go home already. Her look was beyond dull and all the hovering was just plain crazy.

I agree- the purple suit/skirt was by far my favorite. April's was my favorite until it came out, though, so I wasn't too disappointed. I loved both.

Unknown said…
I agree with your take on April's "nightie" outfit. Andy's was awesome, versatile, and wearable.
September 12, 2010 at 7:52 PM

I agree with you, Michael D's creation was hideous. It looked cheap and the cord he wrapped around it highlighted the stomach in a terribly unflattering way. It looked like a bad halloween costume with a bra showing.

Ivy. Is. A. Bitch. I can't stand her. Honestly, my favorite is probably Andy, because he's so chill. But I don't LOVE him, not like past competitors. I agree with the other post, this season is so BORING. It's just petty catfights and bad designs.