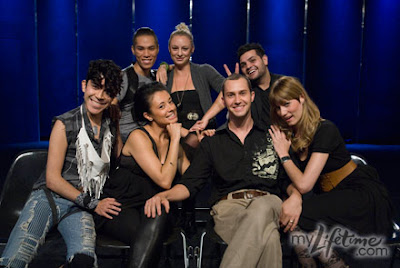 The Project Runway promo makers need to be shot. They teased last night episode more like a horror film than the emotional and personal episode it turned out to be.

Project Runway brought back the textile design challenge from last year, but with a small twist. Instead of creating a print that fit their aesthetic, they had to create a print that spoke to a certain memory or had a deeply personal theme. Each designers computer showed pictures from their childhood to inspire them. Take seven tired people, add way too much stress, demand they be creative, threaten to crush their dreams and then show them pictures of their family and you have the perfect recipe to make them all blubber and bawl. To make matters worse/better they brought in their moms (except Christopher who got his partner and Michael C who got his mom and his son).

Thankfully this wasn't a "dress your mom" challenge, or worse yet a "dress someone else's mom challenge." The designers got to spend the day with their family members and forget about designing. The way the producers have been riding them with a challenge a day has been a bit ridiculous. I'm glad they got a little break. The break wasn't beneficial for everyone though. It distracted several designers who thought more about family, home life and personal stuff than about the clothing they were making it.

The judges talked to all of the designers last night. Michael C seemed to be in the middle as far as the judges were concerned. Michael Kors thought the dress looked dated and hated the matchy-matchy styling. Heidi liked it. His print wasn't terribly exciting so the judges gave him a half compliment for using yellow to punch things up, but I think they would have much rather seen him use more color in the textile itself.

Gretchen seemed to be in the top three even though this look isn't very exciting. The judges weren't excited either, but they liked her print, which was inspired by her mom's sun bonnet and squash blossoms. The print fit Gretchen, but the judges wished she had arranged it better with varying sizes and less blank space. As for the outfit, they were just OK with it. They didn't see it as interesting or challenging--just as nice clothing. I didn't care for it at all, but maybe I'm still biased.

April came quite close to winning the challenge. The judges loved her print and how she used it in the dress. April used the image of a split family tree to symbolize her parent's divorce. It was an interesting, and she used it well by revealing parts of it and hiding other parts--a move that symbolized how she handled the divorce. The judges loved all that, but they hated the skirt. Michael Kors did acknowledge that the skirt fit her aesthetic with it's raggedy feeling, but the judges still felt it wasn't quite right.

Mondo won this week, but it wasn't a jump-up-and-down win like last week. Mondo's print wowed the judges. They love that he made pants from it and paired it with another print. Nina's only complaint was that the pants might be a bit high-waisted (also, Mondo's pants look like they don't fit in this photo. That didn't show up at all on the runway last night so I'm going to assume the photo is wrong). Nina praised it for being editorial and wearable. Mondo has refused to share the story behind his print, but the judges words of praise and Nina's desire to know opened him up. He shared that the plus signs in the print represented his HIV Positive status. He'd been keeping it a secret for 10 years. The judges not only applauded him for sharing they also applauded him for creating such a vibrant and positive print to represent such a painful secret.

Christopher continues to create boring clothes I could probably buy at Target. His print was inspired by the ocean since he grew up in California. Guest judge, Rachel Roy, said she didn't really get ocean from it. Nina said this wasn't fashion. The judge all worried about Christopher's abilities moving forward. Then they put him through to next week. He really is just being safe every week. I'm bored.

Andy was the most thrown by seeing his mom. He couldn't get his head back in the game. He lost all inspiration for his print, which was inspired by bubbles of memory. He created something that looks nothing like him. It was a horrible job from Andy. Heidi called it unwearable. Thankfully, he is safe, and hopefully, he can pull himself together.

Valerie went home. She created a print inspired by blueprints because he dad is a builder. I liked her skirt which the judges hated and compared to her napkin skirt from the party store challenge. I do have to agree about the top though. It did not fit properly. It wasn't well made and fabric techniques created kind of a stiff look. I would have preferred to see boring Christopher go home, but at least his clothing fit so I can't argue too much with their decision to eliminate Valerie.

What did you think of this episode and the winner and loser? Was anyone else annoyed by the over the top promos? Next week Heidi is the client. If the promos are even half accurate (probably not) she'll fight with Mondo and someone will get kicked out for cheating. (Of course the past designers are coming back to help so it could be one of them.) I wonder what will really happen.

Also, who do you think will be at fashion week? I'm cheering for Mondo, Andy and April (she's really growing on me).
Project Runway

Rachel said…
The editing in this show cracks me up. It's so misleading!

I agreed with the winner and loser yet again this week, though I'm also really bored with Chris. I'm expecting him to go next.

Wendy Lane Bailey said…
I think it was clear that Mondo was going to be the winner the moment his model stepped onto the runway. His outfit was the only one that really had a wow factor. Even the other designers gasped when they saw it. He didn't play it safe and it paid off. The other prints seemed to lack punch.

Robin said…
Ditto to all the Mondo love. I cried a little when he revealed his secret. That's a Project Runway first.

I liked Valerie, but she's been making missteps for weeks now. It was time.

I'm wondering if the cheater situation next week will be Gretchen finally voicing her thoughts that Michael C. copies her? She whines about it pretty frequently, and after all the recent Michael C. love he was shown defending his place on PR again. Curious.

I would love to see Mondo, April and Michael C. make it to fashion week. I cried when Gretchen's mom showed up (damn this episode!), but I still don't really like her. Andy is good but his aesthetic doesn't really speak to me. A collection from him wouldn't hold my interest long.
October 2, 2010 at 9:38 PM

yourstrulydear said…
mondo is my favorite, and then april. and i love your first line about christopher hahaha. so true!
October 3, 2010 at 10:24 PM