Project Runway S8 Ep 6: You Can Wear It Again

By becca - September 02, 2010
I'm bored. The clothes are getting less and less exciting. I'm actually quite pleased with the challenges this season. This week the designers had "real women" models instead of their usual models and had to turn their hideous bridesmaid dresses into something they could actually "wear again" (as all brides promise you can do with these dresses). 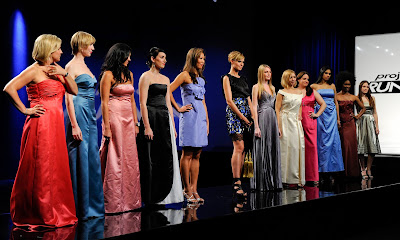 I'm glad to see the challenges get more interesting, but why aren't the designs better? Why can't I even remember what the winning design looked like? Part of the problem may be with the designers, but I think the real problem is the time constraints. Yes, Project Runway has always had time constraints. It's part of the challenge, but since moving to Lifetime they rarely get more than a day. They were supposed to design avant garde outfits for Philip Treacy hats in a day? They created a six piece collection in a day? (with six people per team, but still.) I think a few more two or even three day challenges will result in more interesting garments, which will result in a more interesting show.

One new featured I liked was the idea of a public showcase. People got to vote for their favorite dresses. I wish the voting results would have been revealed to us and I wish we could know who actually received the most votes (my guess is not the winner). Anyway, on to the boring clothes.

Casanova was safe this week. He would have been safe regardless because he has immunity from his win last week, but I think he should have scored a top three spot. He made pants out of bridesmaid dress material. He made awesome, perfectly tailored pants out of bridesmaid dress material. Most PR designers struggle to make pants out of good material. His tailoring skills deserved recognition over Christopher's "eh, you're kind of in the top" reviews from the judges. Also, Casanova gets the nice guy award. Everyone else is so catty I'm getting annoyed.

April's model was pretty hard to work with. She didn't like April's design aesthetic at all. April mostly ignored what the model wanted, but I think it made her edit better than she ever had before. This is actually my favorite piece from April so far.

Ivy's top was pretty, but it needed to be longer . Also, I'm not sure the proportion of the pant was quite right either. Her personality is grating. Also, I don't know why she clung to and spread the rumor that Michael C. was sabotaging her at the showcase. I don't know him but he doesn't seem that vindictive. Also, just because you don't respect someone's design talent doesn't mean you getting to stop showing respect for them as a person. (Also, if MC was going to sabotage anyone, I think it would be Gretchen).

Andy disappointed me. He usually creates something far more interesting. The top was well made enough, but the shorts were blah and not the right length. Come back, Andy. Do cool stuff again.

Gretchen's look was OK. At the public showcase it was showing major side boob, but she fixed it by the runway. The handpainted detail on the front was kind nice. I do give her props for not starting anything with Tim and taking his advice (proof that she is an intelligent person because fighting with Tim is idiotic). She laid low until results when she became annoying again.

Christopher received an odd top three spot. The judges didn't seem to really love it, but they didn't hate it. As I mentioned, this spot could have been Casanova even though his garment wasn't earth-shatteringly great (neither is this though). Christopher did start with the ugliest dress, and he got his model (and the dress he chose) switched at the last minute. He made it work.

Mondo should have won. He really did a good job with the vibrant pink dress he got He used the reverse side of the fabric for a more matte finish and made a cute little mod color-block dress. I bet he got the most votes at the showcase. The judges didn't like his styling (Michael Kors called the hair and makeup "Snookie and the Flintstones), which is what probably kept him from a win.

Michael C. won and now everyone hates him more for it. I'm not sure I understand this dress or why won. It looks very 80s prom to me. I guess parts of it are cool, but next to Mondo's dress it didn't seem like a winner. Michael C. did probably work the hardest to make his model happy and she wanted a lot to be going on. He earns immunity next week. Be prepare for Gretchen to try to eject him anyway.

Valerie tried color blocking and had a similar shocking pink to Mondo. Sadly for Valerie, Mondo's color blocking was extremely successful, which pointed out how unsuccessful hers was. The proportions were way off. Michael Kors said it gave her "nursing grandmother chest." When someone decodes that please tell me what it means. Valerie deserved her bottom three spot this week, but she is safe and will hopefully redeem herself next week.

Michael D. was the last designer to choose his model/dress so he got the dress with the least usable fabric on the largest sized model. He didn't complain about her size and I thought he was rather sensitive (unlike some past designers). He really wanted to make her look pretty but struggled with the tight budget for extra fabric. I also think he got lost because I didn't see much of his signature style in here. I don't think it was as bad as the judges said (MK quipped that it went from "bridesmaid to batmitzfah"). Maybe bridesmaid to Torrid summer sale. I'm glad he made it out safe so we can see what else he has to offer.

Peach is out. Her dress really was terrible. Here are some of the judges remarks: "Holly Hobby halter," "avacado dinner napkins," "avacado goiter," "homesewn," and "secretary from 1987 on the bottom." MK also quipped that she looked like she was at "the church bring a pot dinner." (First of all, dear, its called a potluck, and, second of all, people don't dress like this at such functions, but maybe this dress could be made from the assorted pot holders that come in with the food.) I do think she deserved to go home and wasn't surprised to see it happy. I will miss her personality (just as I missed A.J.'s cheerfulness this week). Tim will miss her too. He bid her farewell by saying, "And now I know how to say 'You have more legs than a bucket of chicken.'"

What did you think of this winning a losing designers this week? Are you getting bored with the clothes too? Are there any designers you're really routing for or cheering on (I'm so bored I feel myself not caring much). Is this a mid-season slump or are we doomed to more of this so-so (sew-sew? bad pun, sorry) fashion?

Anonymous said…
They did reveal who got the most public votes, and it was Mondo.

Thanks, I must have missed that announcement.

Rachel said…
I definitely agree that Mondo should have won (especially since he got the most votes from the public), but I do understand why Michael C won. Plus I feel sorry for the poor guy- everyone is so mean!!

And Peach was definitely the right choice to go home. It was inevitable anyway. I'm glad it was a happy goodbye though!

I do hope the designers step it up... I'm surprised how "wearable" everything has been. And I'm getting really really sick of the Michael C bashing...
September 3, 2010 at 10:29 PM

Cheshire_Cat said…
I think that 90% of the designers in this season are just not as talented as the previous seasons - either that or the 1 day time constraints are killing their design powers.

I hope that the upcoming challenges produce some surprising looks that make me say "Oh my god - I want to wear that!" not "Oh my god - they call THAT fashion?!"
September 5, 2010 at 1:45 PM

Kaye said…
Mondo definitely should have won. I didn't hate Michael C's dress, but I definitely didn't like it as much as the judges did, either.

Peach definitely was the right choice to go home, but I will miss her. I was really disappointed with Valerie this week, because she's often one of my favorites.

Also, I'm beginning to like Casanova a lot better than I did initially. He should've been in the top this week.
September 5, 2010 at 6:13 PM