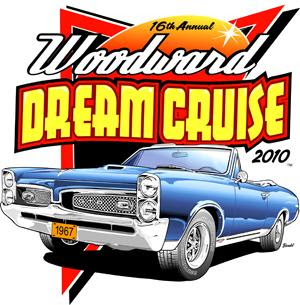 Every year, automobile enthusiasts from around the globe trek to Detroit for the Woodward Dream Cruise. To the uninitiated watching old cars drive up and down Woodward Ave in Metro Detroit may sound boring, even silly. But to a native Detroiter, former automotive journalist, and all around car lover (that would be me!), this is quite an event. People don't go half way for the Dream Cruise. Many people, women especially, can be spotted in era-appropriate garb when riding in their cars. I've never cruised in the Cruise before, but if I ever do ride in a classic car, I will dress the part. Here's a wishlist of cars* made each decade from the 1920s - 70s, and dresses to go with them**.

There's really only one car from the 1920s anyone needs to know about, and that's a Duesenberg. Or should I say, "That's a Doozy" since we got the phrase from this automobile's grandeur. Every time I see this car, I can only say, "Now, THAT'S a car." The woman riding in a Duesenberg wasn't wearing just anything. She was wearing Chanel, who had just made the little black dress all the rage. This "Off-Centered of Attention" dress from Modcloth recalls many of the qualities of Coco's flapper-ish LBDs. It costs $79.99. 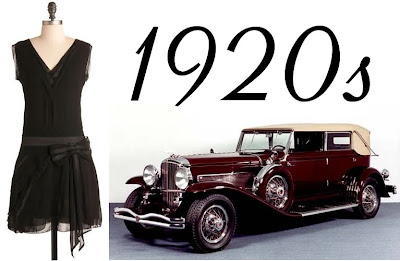 In the 1930s the cars and fashions became more curvaceous. Women left behind the boyish looks of the twenties and cars curved everything from fenders to grills. This Hupmobile exemplifies class and style. This Eliza J Shirtdress from Nordstrom ($118) comes fairly close to the thirties silhouette, collar style and class. An added ascot or high neck blouse would help it achieve a truer thirties look. 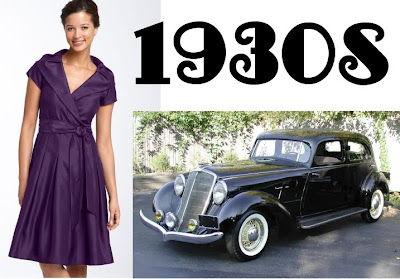 The 1940s produced fewer cars than previous and subsequent decades. The war limited the production of automobiles, but the Lincoln Continental Mark I provided appropriate, understated style for the time. My grandfather owned one similar to this. Women were becoming more practical too by using less fabric, adopting menswear suit looks and wearing clothing that was easy to work in. This Salute To Style dress from Modcloth ($169.99) takes several liberties on forties style, but captures the spirit of era. When I think of the 1950s, one thing comes to mind before poodle skirts, soda fountains and sock hops. That one thing is the famous '57 Chevy. It has to be powder blue and preferably a convertible. Look at those fins! Of course, that means the accompanying dress must have plenty of flair to match. (Look at those buttons!) This black and white dress from Bettie Page Clothing costs $130 and defines riding in style.

I must thank Mad Men for giving us all a healthy dose 1960s style. I don't follow the show, but I do know I need those red dresses worn by Christina Hendrick's character, Joan Halloway. They are the perfect match to my favorite car ever, the 1963 Corvette (split rear window coupe) in red, of course. Look at that car! It goes with everything. And this Red Wiggle Dress from Pin Up Girl Clothing ( $78) goes quite well with my dream car. I may need red hair to complete the look. 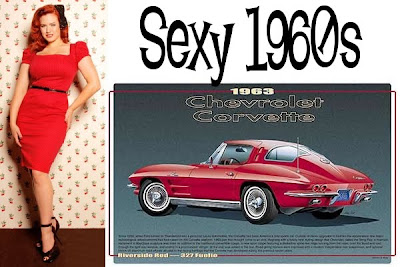 I know Fillmore from the Pixar film, Cars, isn't a true 1970s vehicle. It's a cartoon, but it totally captures how I feel every time I see a '70s hippie van painted crazy with colors, flowers and love. It's similar to the feeling I get from donning a long tie-dye hippie dress and twirling until the daisies fall out of my hair. (Pictured: Tie-dye ruffle maxi from Arden B. $34.50) 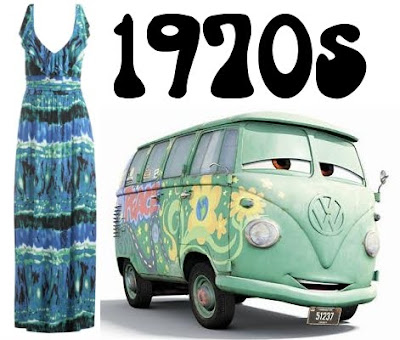 If any one would like to loan or give me one of these cars, I would gladly accept. I would also settle for a ride down Woodward Avenue in a couple of weeks. Are there any events in your area that inspire you to dress in costume from a certain era?

*Special thanks to my Daddy for helping me come up with some of the cars. I'm lost pre-1950s!
**I know my dresses aren't all spot on with the decades they come from. I was looking for modern dresses you could buy now that capture the mood but could still work in an everyday wardrobe.
icons inspirations shopping

Sarah Dee said…
Fillmore! ooh i want me a fillmore!

rachel said…
This makes me wonder what happened to my grandparents' classic they kept in the barn... It wasn't a lincoln continental, but it looked similar. I used to lay on the leather seats and think about going to church wearing white gloves and a hat.
August 5, 2010 at 9:08 AM