By becca - August 30, 2010
I was actually more thrilled by the opening of the Emmys (video below) this year than I was by the red carpet. After all it started with Glee and quickly got better. (Jorge Garcia! Betty White! Tina Fey! Joel McHale! Tim Gunn! All doing a musical number!!!)

Jael Paris and I both picked purple dresses as our choices for best dressed. We also both picked controversial dresses. Jael picked Christina Hendricks lilac dress. She loved the feather details, the color and the fit. The best/worst dressed lists are mostly hating it, still going on about putting a big girl in a big dress. I'm with Jael. It was incredible. My favorite dress of the night was Emily Deschanel's. I'm a sucker for purple and ruffles. I also like Emily's 'Zooey' bangs, which most of the fashion round-ups thought were too matchy with the fringe style of her dress. I disagree. I love it! And I love what a bold choice she made. (I also love that she presented an award with Nathan Fillion). 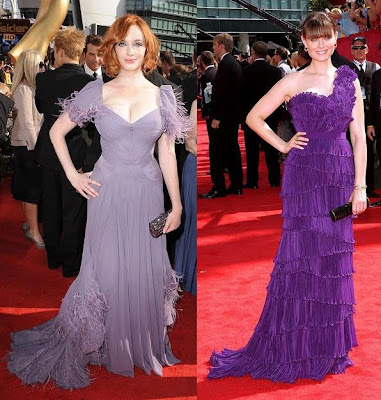 Hendricks and Deschanel weren't the only ones rocking the purple trend. Several others wore variations of the regal color on the red carpet. Amy Poehler looked stunning her lilac Max Azria gown after having a baby only three weeks ago! 30 Rock's Katrina Bowden picked a bright flirty variation on purple. Emily Blunt looked soft and stunning like a Wedgwood Cameo on her lovely lilac dress. Jane Lynch took full advantage of ditching Sue Sylvester's track suit for a pretty purple dress when she collected her Emmy for best supporting actress in a comedy series. 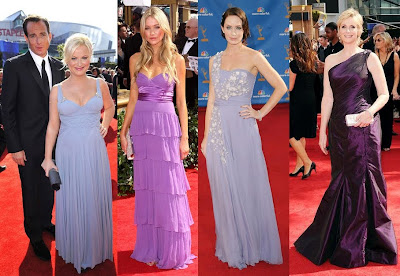 Navy was the other big color trend on the red carpet. Lea Michele looked gleeful in her ruffled Oscar de la Renta navy frock, which was one of the best dresses of the evening. It overshadowed Jayma Mays serviceable Burberry Prorsum navy dress. Mays character on Glee has become known for her adorable style. She doesn't need to dress like Emma Pillsbury, but I do wish she would step up her style since we're used to seeing more from her on TV. I've read a couple of knocks against Jane Krakowski's dress, but I liked her sparkly, navy Escada gown. She often looks boxy on the red carpet, but she looks great here. Julie Bowen looked lovely in her J. Mendel gown with a ruffled neckline and hip-accentuating ruffles. 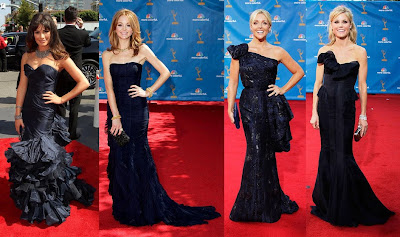 The red carpet is rarely short on sparkle and this year was no exception. None of these shimmering dresses is all that unique when it comes to design, but there's just something irresistible about a Swarovski encrusted gown. Claire Danes looked like an award herself as she collected her best actress in a miniseries or movie Emmy in this Armani Prive gown. Julianna Margulies chose sparkles in an intricate design with her L’Wren Scot dress. Sofia Vergara wore a radiant pattern of gold sequins on a Carolina Herrera gown that captured her vibrant personality. Dexter's Jennifer Carpenter looked deadly in her glittery gunmetal gown. Glee's Heather Morris sparkled so much in this gold dress that I almost didn't recognize her. 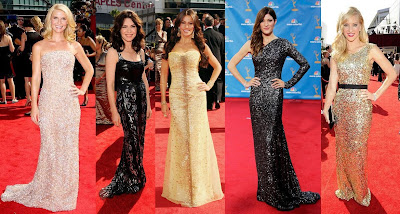 In a see of jewel tones and sparkles it's nice to see stars switch up textures with prints and patterns. Tina Fey got it right in the pretty printed Oscar de la Renta gown ( I only wish she would have ordered it in a color). I love the scenic print on Toni Collette's simple dress. Recent breast cancer survivor, Maura Tierney looked flawless in her floral orange gown. Glee's Diana Argon went ultra feminine in this floral lace frock. I'm not crazy about the tiers, but I'm glad she wore something so interesting. 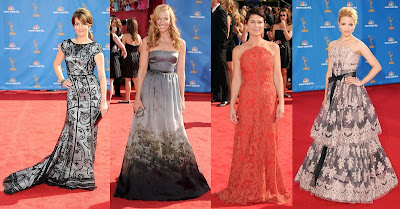 Black and red are red carpet standbys but both run the risk of blending in. These stars did a great job of standing out. Kelly Osborn picked the perfect black dress and fashioned herself to be quite a Gothic beauty. Kyra Sedwick's Monique Lhuillier gown is made of chiffon, but I spent the whole night trying to figure out how it looked light and sueded at the same time. Anna Paquin loves wearing Alexander McQueen. Jael and I weren't fans of the weird tuck at the knee, but we loved the bead work at the top. Besty Brandt of Breaking Bad had me Googling her name the minute a saw this dress (her stylist should be tipped well.) 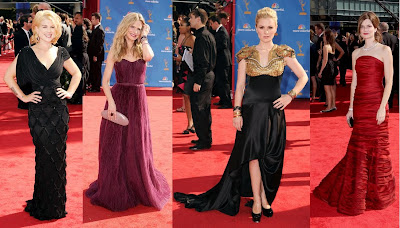 Jael and I both thought January Jones had a transformed mermaid vibe going for her in this blue Atelier Versace gown. I think it could have done with out the train, but we both agreed that her hair was a shipwreck. She looked like she washed up on shore only minutes before climbing into her dress. 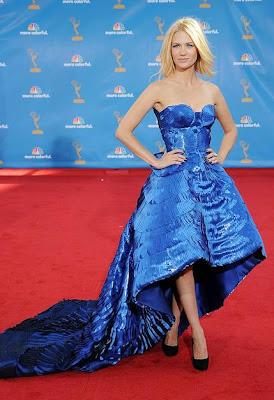 Modern Family stars Rico Rodriguez (age 12) and Nolan Gould (age 11) not only get my vote for cutest red carpet appearances, but they were also among the most fashionably and adventurously dressed men in attendance. 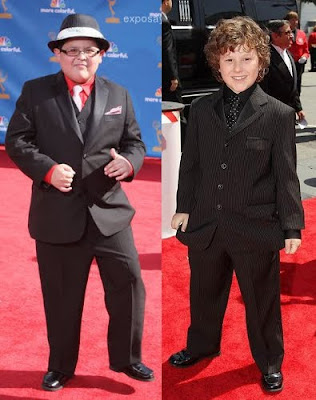 What were your favorite and least favorite looks on the night? Do you disagree with any of our favs? Does anyone else think Terry O'Quinn and Sofia Vergara were robbed?