To be perfectly honest, I've never been a fan of Valentino. As he said in this documentary covering his last last three haute couture shows -- Spring 06 through his 45th anniversary retrospective of Fall 07 -- he knows what women want. "Women want to be beautiful." Since I'm one of the rare women who doesn't dress with the goal of beauty, I'm not his market. That said, I respect his work. 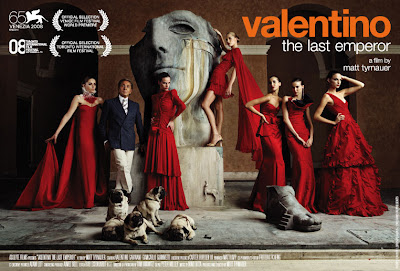 Valentino made his first splash on the international fashion scene in 1962. That height of couture with names like Chanel, Balenciaga and Yves Saint Laurent dominating the magazines will most likely never be captured again. It was a golden time to birth fashion. Each pleat, length of ribbon and rhinestone belt speaks to the era of his origin and his deep love of silver screen glamour (no wonder he's a red carpet favorite). 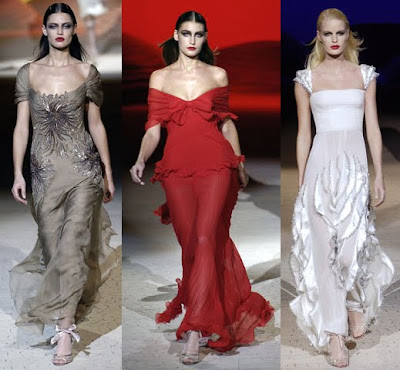 Each of these dresses contain a surprising amount of hand stitched detail.
Glamour and romance were all Valentino would talk about. The Last Emperor was portrayed as a demanding, vain and passionate dreamer who would not be able to function, let along steer a fashion empire, without the aid of his business partner and boyfriend, Giancarlo Giammetti. 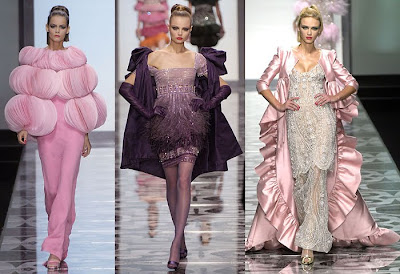 The movie was an interesting glimpse into the life of a man who has long dictated what we consider beautiful. It also provided some details on the inner workings of a fashion house and what it could be like to put on a fashion show. Both of which look far more hectic than beautiful.

Favorite tidbits: Valentino travels with an entourage of five pugs in harnesses that allow them to be picked up like purses.

The designer, 75 at the time of filming, loves to ski.

He and his partner of 45 years, while both Italian, speak to each other in French.

A news blurb from one of the affiliates in my area, South Bend, Indiana, was featured in the movie. That was a completely random surprise.

No other designer has designed for his/her own line for 45 years.

Head seamstress has to be a stressful, thankless job.

I could never be a model. Not only are my ribs (thankfully) not visable, I couldn't stand in a room wearing nothing but a g-string while a crowd around me draped my frame in cloth and poked me like I wasn't really there.

When Valentino throws a party, Gwenyth Paltrow, Elton John, Joan Collins, Liz Hurley, and Michael Cain show up. So just like my parties then.

Not struggling for cash, Valentino has at least two mansions, a private jet, a yacht and ... a minivan?