Book Review: The One Hundred 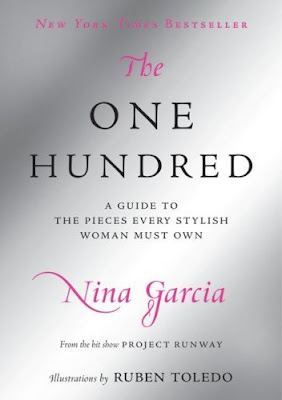 Specs: The One Hundred: A Guide To the Pieces Every Stylish Woman Must Own written by Nina Garcia; illustrated by Ruben Toledo. Published in 2008 by Haper Collins. $17.48 new

Pros: Like The Little Black Book of Style also written by Nina Garcia, this book is full of fun fashion facts, cheeky illustrations and fashionable quotes.

If you thirst for more of the stylish fun found in the Project Runway judge's first book, this is a good place to look. The list of 100 items often feature relevant quotes, fun facts, mini history lessons and buying tips. Nina also names a lot of her favorite and iconic versions of each piece.

Nina covers everything from diamond studs to zippered hoodies. Even if your style is casual, you should be able to find entries that interest you.

Cons: One of my favorite things about Nina's first book was that it could fit in a purse, which made it a great gift for all my friends who wish I had time to be their personal shopper and fashion consultant. This book has quite a bit of heft and not nearly as much useful content.

It is no doubt a fun read, but it contradicts some of the tenets of Nina's first book such as "edit" (since it seems to think you need all this stuff, some in multiples) and "it's not about the money" because many of the recommendations cost a lot of money.

Also, I lack the expertise of Ms. Garcia, but I still argue that it isn't a must for every woman to own a push-up bra, an exotic skin bag, real Pucci or any of the other specific designer goods she names.

Read this book as a fun list of fashion tibits, trivia and inspirations. Do not read it as a checklist.

Favorite Tidbits: The cardigan got it's name when the Earl of Cardigan needed something under his uniform to keep him warm during war.

Mary Janes are named after a comic book character who wore them. Mary Jane's brother, Buster Brown (also the name of the comic book) has a shoe brand named after him.

Cocktail rings got their name from the lavish rings women wore to illegal prohibition-era cocktail parties. They wore the rings to signal that they were not only drinking, but doing so with style.

Favorite Quotes: Like with her first book, Nina listed a bunch of quotes throughout the book. I love them all, but here are a few I had to pass on.

"Why make everything black, black, black? Fashion should be fun and put a woman in the spotlight with a little bit of danger, you know?" - Roberto Cavalli

"If someone wants to know what kind of mood I'm in, read my pins!" - Madeleine Albright (A well chosen brooch says more than even a 100 pieces of flair could.)

becca said…
Sarah Dee, The quotes in all of Nina's books are my favorite parts. It really would be worth it just to buy them for the quotes she's put together.
May 11, 2010 at 8:16 PM

Unknown said…
I love little books like this-- always interesting for being half comically unnecessary and half intriguingly elegant.
May 12, 2010 at 1:28 AM