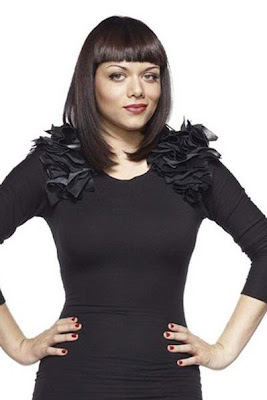 Sorry, I just don't know how to feel about last night's episode.

Just so I don't spoil anything for people who haven't watched. I'm going to tell you about the challenge before getting to the interesting stuff. Don't keep reading if you want to be surprised when you see it.

This week the designers had to create a red carpet look for an opinionated and picky celeb. Guess who? Heidi. This was a boring challenge. They've already dressed Heidi this season (for the Covergirl Challenge, which has its resulting Marie Claire cover on newsstands now). They've done gala dresses too so this seems redundant. However, it might be good that the challenge wasn't surprising, since the episode was.

Here's the run down. Maya quit. Anthony is back. Seth Aaron's model, Valeria, left last minute. Cerie is back as his model. Lifetime spent a lot on flights this week.

When a designer leaves, it is policy to bring the last eliminated designer back.....ANTHONY!! Yay! I'd rather have Maya, but at least we got Mr. Personality back. Anthony was brought back after the designers had already sketched and shopped a Mood. He was sent to Mood alone and given extra time at the end of the night. This meant he only had an hour or two of sleep and he wasn't as far along when Tim and Heidi came in to critique the dresses, but he seemed so happy to be back he didn't care. I'm glad such a fun designer came back to save the mood. It was stressful last night.

On to the designs. Seth Aaron was the first safe designer. The judges criticized his black dress for being too boring and not sexy enough for Heidi. Nina said he stayed too true to himself and forgot to design for his client. They wondered where the "wow" was. To be fair, Seth Aaron has a lot of adjustments to make. His model, Valeria, was offered a big job on the day of the runway. She turned it down at first, but they really wanted her and doubled the money. Seth Aaron already had a lot of work done when he got the news. Cerie doesn't have the curves Valeria has. Seth Aaron had stressed that fit was going to be the focus when he started. With the switch, he didn't have time to redo the dress for an impeccable fit. He just had to "make it work." A better fit could have made it sexier and more appealing to Heidi. Regardless, I think Pink should call him up for some red carpet looks.

Mila was safe next. The judges also disliked her look for being too simple. They felt she had no innovation. I'm glad she tried to leave the black and white behind, but, just like last time, this left her with a boring look anyone could probably buy at a prom store. They hated the neckline and how the boobs fit (boobs must look good for a Heidi challenge!). Nina said, "It looked like something the housewives of New Jersey would wear." Ouch. But I agree.

Emilio was the winner for this challenge. Is that three weeks running? Why do I still dislike him? I didn't want to see this dress win, but it was the best look. It had the internal structure that a lux evening look needs. It was an eye catching sparkle without being gaudy or cheap. Emilio is good at creating excellent, classic pieces. I'm not sure how that will translate to a fashion show though. I guess we'll find out since he seems to be on his way to Bryant Park. Oh well.

In a surprise move by the judges, Anthony was also the winner for this challenge. Guest Judge Jessica Alba like his black and white creation so much she wanted to wear it on the red carpet. (Way to get paid for being a guest judge and walking away with a free dress). I liked Anthony's look. The judges had nothing but praise for it. He was shocked to come back for a win. I'm happy for him. 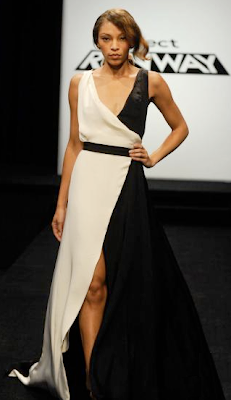 Jay found himself in the bottom two. Jay is impressing me less than he was in the beginning. I like the idea of what he was doing here, and I like exaggerated hips in a dress, but this dress didn't exaggerate so much as it widened. The skirt probably needed more volume to make it work, and the bodice could have worked with a flowing skirt, but it was a lot of look with the poof skirt. I also think the boning on the bodice should have followed an hourglass shape rather than looking like an outline of the tummy. That paired with the horizontal fabric, made the model look wide with a bit of a belly. Also, it had bad boobs and this was a Heidi challenge.

Jonathan went home. He started out creating this elaborate cut out filigree, which Heidi hated when she came in to critique with Tim. He started over only to create a mess of tangled fabric. So, he started over again to create another mess of fabric. He should have probably kept the first dress and just left off the filigree. The dress was bad. Jonathan liked the back, but it was so short, Jessica Alba commented that a large step could prove to be very revealing. Jonathan's been in the bottom a lot lately. His dismissal was no surprise at all. (Which is good because I was done with surprises at that point).

OK readers. What do you think of all this? I'm sad to see Maya go. I was pretty bored with all the looks this week and thought they picked a rotten time to have two winners (even though I love that Anthony got a win). I'm sick of boring red carpet looks and I'm sad the designers and judges encouraged more boredom on future red carpets. Blah.

Next week decides who goes to fashion week. I don't know what to think anymore. I don't like Emilio, but it looks like he'll be going. Seth Aaron better make it. He'll design some interesting pieces. I'm bummed by Jay lately, but I think he could put together a great collection. Plus, Jay is one of my original picks so I'd like to see one of those make it. I like Anthony, but I don't know if he could compete at Bryant Park. I hope Mila doesn't make it because I'm completely bored with her. What are you thoughts? Who do you want to see at Bryant Park, and who do you think will actually make it? What did you think of Maya's decision to leave and Anthony's return? Were you bored by the dresses?
Project Runway

Robin said…
After Amy left (heartbreak) and Anthony was gone (sad because I love him, but kind of expected) I set my sights on Maya and Seth Aaron. At this point everyone else kind of bores me. I agree- I don't like Emilio's work and I'm not sure why. I strongly disliked his dress this week.

I'm happpy Anthony is back. I want him and Seth Aaron for Bryant Park (though I'm not sure about an Anthony collection). Not sure who else- I suppose Emilio.
April 2, 2010 at 4:52 PM

Gaëlle Pfyffer said…
I'd like to see Emilio at fashion week, because he does interesting stuff, but not win, because he highly annoys me. I hope to see Seth Aaron win! I'm not so much into rock-inspired clothes, but I think he is so interestig and he is a perfect taylor. Plus, he appears to be so nice!
As for who else... I agree, Mila has been boring after the 4th episode or so and Jay has dissapointed me. Plus, I really do not like his model. Anthony is fun, but, even though I think that elegance is extremely important, he is also too safe.
As long as Seth Aaron makes it to fashion week and wins later, I'll be happy!
April 2, 2010 at 8:40 PM

Rachel said…
You don't like Emilio because he's an arrogant jerk... I don't like him either. This dress was obviously well made but I usually disagree with the judges when they adore him.

I was shocked that Maya left but excited to see Anthony back (because he's just so lovable).

I'm bored with Mila and Jay.