By becca - April 22, 2010
Tonight is the Project Runway Finale! I will be live blogging the finale right here on Fashion Me Fabulous. Be sure to join in the fun and comment along with me. The live blogging will begin a few minutes before 10 p.m. Eastern tonight and will continue through the post finale reunion show.

To prepare for the finale, I've been reviewing our top three's work thus far. Here is a summary of their Project Runway journeys: (Be sure to vote for your favorite in the poll below!) 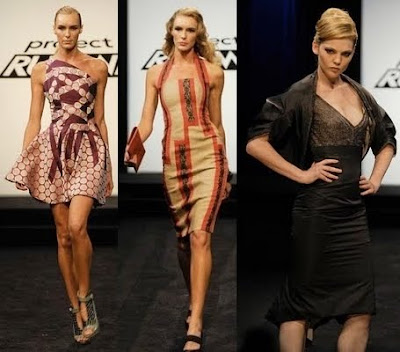 Emilio started off with a win. While this is a very pretty dress, it felt to average to me. I liked his textile creation, but was bummed to see him do it again the following week with the potato sack challenge. His attempt at Couture was dismal (like almost everyone else). 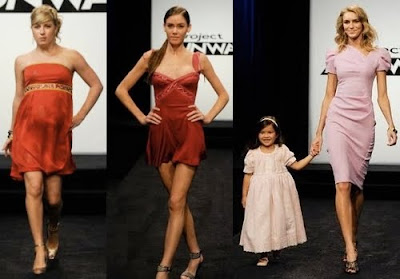 Emilio continued to disappoint with the "Go Red for Heart Disease" challenge, which I could have purchased at a cheap prom shop. The judges liked his "Cover Girl" look, but I thought it resembled an ice skating costume. While I quite liked his "mommy dress" the little girl dress was dull, dated and doomed from it's frilly pink beginning. 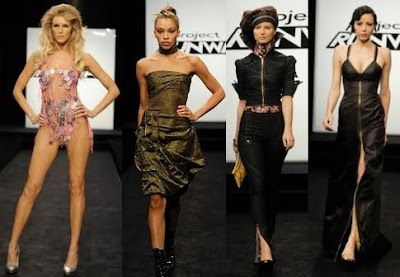 Washers and hot pink twine are not clothing. His elements look was the most literal with the clear earthy feel, which I neither loved nor loathed. Teamed with Seth Aaron he helped Seth created a sweet Harlem-inspired city look, but his evening dress was less than exciting, even if he and Seth both earned a win. 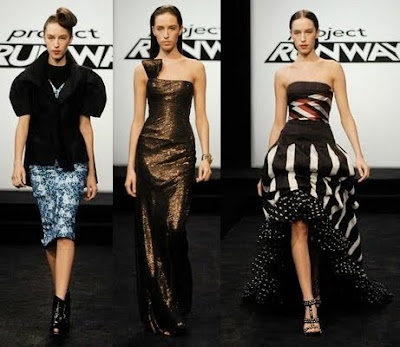 Emilio created a logo print, which the judges loved and the rest of the world hated. I do like how he used that shiny material on his red carpet look, but the actual design lacked innovation. Emilio's final look was the only one of the whole season that excited me. I love this, but I really think it was just a fluke. 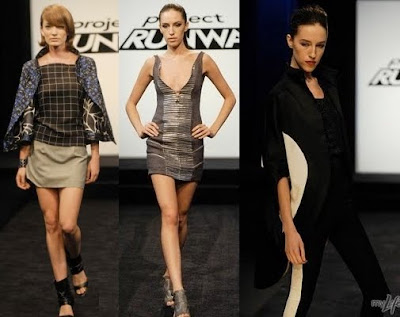 Mila's first outing looked more like a trip to Dress Barn. I figured she offer up a slew of work appropriate separates. She surprised me in the second challenge with a stunning creation made of burlap, and she earned her only win for daring to do pants for a couture challenge. 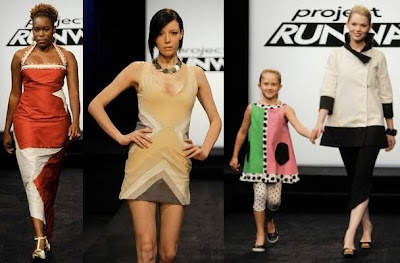 Mila was one of the more innovative designers in the "Go Red" challenge, which the judges liked. I just thought the look was cheesy. The "Cover Girl" looks like bandages and should probably be sent to some fashion emergency room. The child look she made was adorable in a Pebbles Flintstone kind of way, but both looks from this mother/daughter challenge could be purchased at any mall. 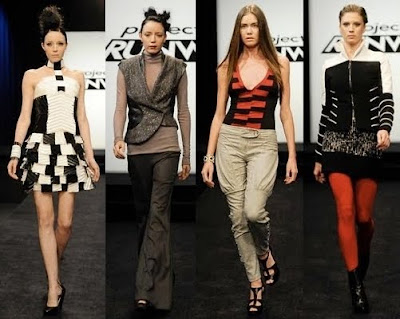 The use of paint tray liners surprised and pleased me in the hardware challenge, but she disappointed with the sad office look for the elements challenge. Forced to work with arch nemesis, Jay, on the NYC challenge she actually created some nice pieces. Although, I didn't feel her creation as quite funky enough for the East Village theme. 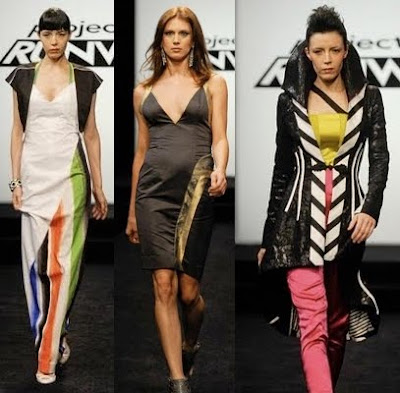 Her use of paint tray liners earlier proves that Mila has graphic instincts, but her print was a major let down. He forays into color mostly unsuccessful, much like her red carpet attempted at metallic earth tones, which looked way tacky at this point in the competition. Her circus look was too much too much, but has some glimpses of the stuff Mila is really good at. 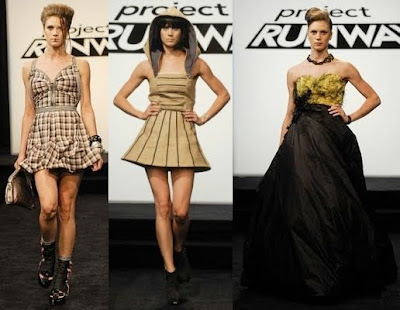 I wasn't impressed by Seth Aaron's first girly punk offering. It didn't seem fresh, new or interesting. I like the hood idea for the burlap challenge, but otherwise felt bored. His couture challenge with Anthony landed him in the bottom three. 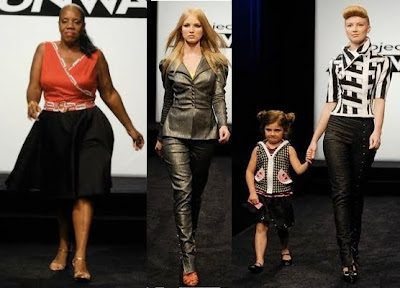 He actually made me angry when he said dressing his women for the "Go Red" challenge was is "biggest" fashion challenge yet. However, he started showing his awesomeness the next week with a gunmetal suit that when unnoticed by the judges. By week six, he has his first win for his mother/daughter set, and has had me drooling over that black and white jacket ever since. 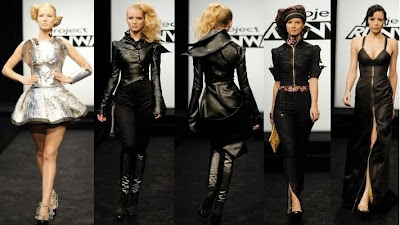 His hardware challenge came from a great idea, but lacked execution. However, his interpretation of the element air as a night sky inspired leather jacket redeemed him quickly. Paired with Emilio he created a fun, funky Harlem look (and probably inspired the only thing interesting about Emilio's dress--the zipper.) 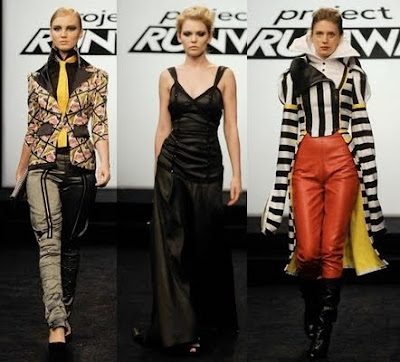 Seth Aaron's print was for sure one of the best on the runway, which earned him a spot on the top three. The judges threw him in the bottom three the next week for his red carpet dress, which wasn't his best work, but he also isn't really a designer who would dress Heidi Klum twice in a few weeks. His circus look pulled out all the stops. I think it actually went a little to far, but it was the circus so I understand why.

Based on their work from the whole season who do you think will win the whole thing? Do you think Emilio has an advantage since he as four wins while Seth Aaron only has two and Mila only has one? Who's body of work looks the best so far? Vote below and leave your thoughts in the comments.
poll by twiigs.com
Polls Project Runway