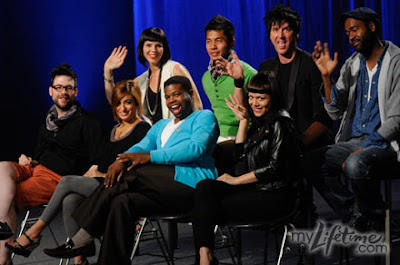 Last night the Project Runway designers were faced with another dreaded team challenge. This team they were gifted incredible inspiration: New York City. The designer were put in teams to two. Team leaders names were chosen from a bag. Leaders then chose their partners. Emilio played a bit of sabotage by picking Seth Aaron instead of Mila. Mila would have fit his style more, but choosing Seth Aaron meant Jay would be stuck with Mila, a pairing that made both of them very unhappy. Each pair chose a part of New York as their inspiration and set off to create two looks--one day look and one night look--for $300.

Anthony was the first to choose his partner and the last to "choose" which area of New York they would use as inspiration. He chose Maya and they set off to Chinatown, the area no one wanted. The day look was inspired by pagodas. The night look was inspired by paper lanterns and dragons. At first I thought the night look, which Anthony made was more Maya, but looking back at his winning cover girl dress, I can see his style in there. The team placed in the top two. The judges praised their restraint because a Chinatown theme could have become very costume-y. I would have liked to see them win especially since Maya hasn't had a win yet. 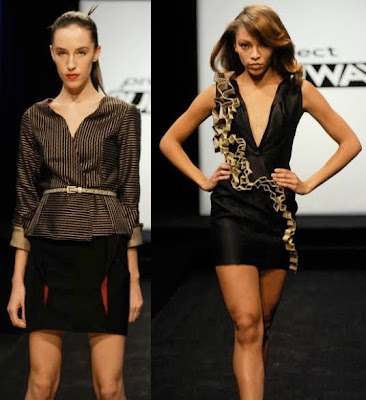 The win went to Emilio and Seth Aaron. This is the first time Project Runway has had two winners in a challenge. They were inspired by Harlem. The day look, created by Seth Aaron, was inspired by all the denim they spotted in Harlem and a mural there. Emilio, who is from New York and used to live in Harlem, went for an old school Harlem look inspired by Billie Holiday. I thought the other team would win because the judges warned Seth Aaron about over doing a look even though he captured the spirit of Harlem. They also thought Emilio could do more and wondered if the dress wasn't sexy enough (even though that zipper can keep unzipping). In a side note, I need Seth Aaron to make me a jacket. 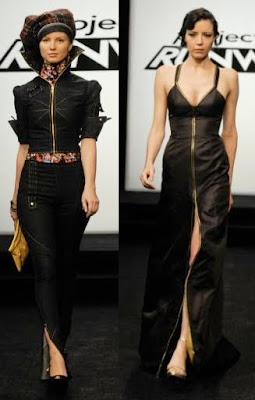 Jay and Mila were sabotaged from the start. However, they behaved civilly and didn't get all dramatic and snarky. Neither one tried to throw the other under the bus in front of the judges. Jay created the East-Village-inspired day look. The judges hated the tank top and didn't care for the pants. The guest judge, Molly Sims, commented that Jay captured the quirky style of the East Village. If the top had been better, I think the rest of the judges would have agreed. I liked Mila's jacket, but I thought the rest of the look was kind of boring. It wasn't quirky enough for their inspiration. 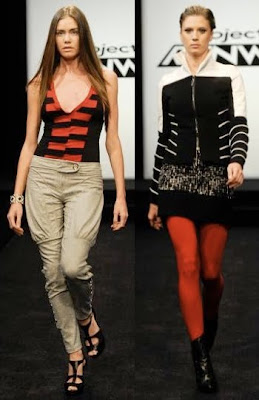 Amy and Jonathan took on the Upper East Side with too many ideas and too little success. Amy, who was in charge of the day look, had all these ideas for what she called a modified shirt dress, but it came out as something very simple, very "I bought this at Forever 21", and not very sophisticated. The hand-pleating Amy did on the trim didn't show up at all. Jonathan had some brilliant plans for a wrought-iron-inspired dress, but he way over designed (something Tim Gunn warned him about). Nina said she liked the idea of the dress, but the side panels should have been left off. In the end, the judges sent Amy home. I'm sad to see her go. I've had her as one of my top picks from the very beginning. I will definitely be following her post Runway career. I think she needs more time when she's designing so she can better edit her ideas. Hopefully, we'll see more of her soon. 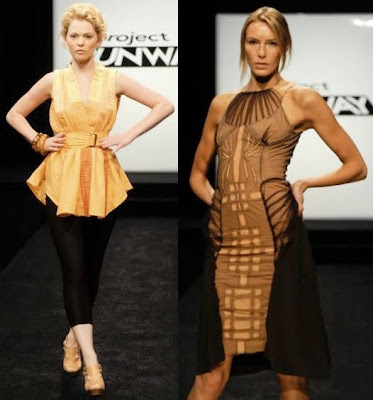 It's getting to the tough part of the competition where it will be hard to see people go. Emilio's designs either bore or horrify me. I'd like to get rid of him soon. I'm also bored with Mila. She creates nice looks but lacks variety. I feel like we'll just see a lot more black and white color blocking if she makes it to fashion week. Jonathan also seems to be a weaker designer, but he's been doing better occasionally. He's not consistent enough though. Anthony is also doing quite well, and I would miss his personality a lot if he got kicked off. With Amy out of the running, I think Seth Aaron has the best chance of taking what I predicted to be her top three spot. I continue to love Jay (in spite of that top) and Maya (even though she hasn't won a challenge).

What did you think of the winner? How do you feel about Amy's elimination? Who do you expect to see at fashion week? Who do you want to go home? And I thought the judges would all be there all season--where was Michael Kors?
Project Runway

Rachel said…
I was sad to see Amy go. I agreed with the winners, and am loving Seth Aaron's designs more and more. I'm kind of rooting for him to win at this point.
March 19, 2010 at 6:50 PM