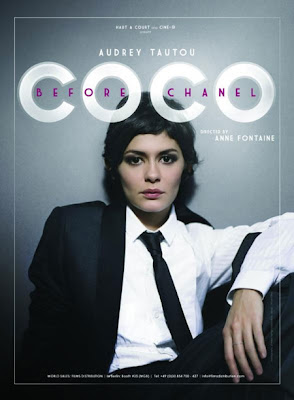 I finally had a chance to Netflix Coco Avant Chanel (Coco Before Chanel) starring Audrey Tautou (of Amelie fame). The movie focused on Coco's life leading up to her first fashion show.

As a poor, skinny orphan Coco grows up to find work as a seamstress by day and cabaret singer by night. Her "sister" is her partner if both endeavors until she meets a duke with whom she runs off. This leaves Coco to find a place to go and figure out how to make her life on her own.

The story was intriguing, and Tautou's quiet performance captivated. We watched through the eyes of a young Coco as she studied the nun's habits in the orphanage and the clothing she frequently stole from the men in her life. She was a quick study as a seamstress. She took apart the men's clothing she found and refashioned it for herself. Learning to ride a horse side saddle became frustrating so she created pants. Every influence seemed to build within Coco.

As she became more involved in the society, she stuck to her simple dresses and menswear inspirations. She refused to participate in the frills and adornments calling them vulgar and insisting they detracted from the beauty of the women wearing them. She started crafting funny little hats for friends. Suddenly, there is quite a demand for them.

We see Coco grow from a little girl struggling to a woman determined. She sets up her own hat shop in Paris where she thrives despite the loss of her great love. By the films end, her iconic clothes walk a runway to enthusiastic applause.

The film showcased Chanel's observations of fashion throughout her life. We get to watch as she takes in new influences, learns to create clothes, discovers the perfection of a little black dress, and creates a feminine empire from menswear influence. It was everything a lover of fashion could have hoped to see about Chanel's early years.
TV + Film