By Jael Paris - March 03, 2010
Some people loved Sandra Bullock's purple Golden Globes gown. Not to say the idea was bad, but I thought the fabric looked cheap. Stay bright but classy and youthful in this foof-mazing pink gown by Christian Siriano. If she wants to be more restrained on what many are predicting to be her big night, this Elie Saab with piles of pale beads won't steal any of her spotlight. 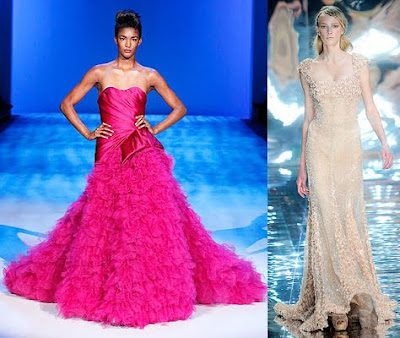 Carey Mulligan's movie An Education was set in 1960s England, so I'd like her to avoid any retro glam. Let's talk antique glam instead in the form of Dolce & Gabbana's embellished to the hilt empire gown from Fall/Winter 2006. Because she's adorable with dimples, she could even pull of an edgier look like Marchesa's sheer train mini. (becca wrote in her Marchesa review that this dress is "worst dressed waiting to happen", but Carey's been erring on the side of old and matronly lately. She needs to tap into her youth!) 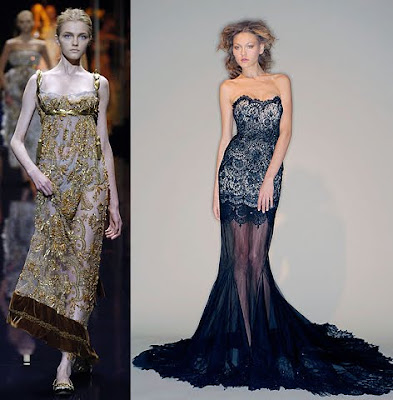 Zoe Saldana wasn't nominated herself, but since her great movie Avatar is a best picture contender, methinks she'll show. She's looked pretty fab on the red carpet in 2009 while not going the safe, old Hollywood glam route. Let's continue the trend with restrained quirk (that is neither sci-fi, blue nor reminiscent of any tribal stereotypes). A few seasons ago, Viktor & Rolf made a rather retro dress with playful folds of fabric at the hips. Not only does the hip detail make it stand out, but Zoe could also rock the difficult ocher color. (Just switch out the flower accessory for some great jewels.) Newcomer Toni Maticevski presented a series of off-beat dresses in New York this season, this multi-tier, multi-texture white number being one of the most restrained in the collection. It fits the white trend we've seen on the red carpet the past few shows, but it won't blend in my any means. 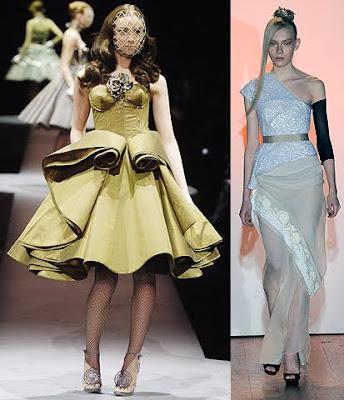 Big women like Mo'Nique tend to rely on things like caftans for formal events, but Mo'ique is not the average woman. She likes who she is and her size, and she doesn't care what you think. I love that she wore a strapless dress for the Golden Globes since stylists usually try to cover the arms of anyone who is over 40 and doesn't exercise like a fiend. Stick with being unconventional, Mo'Nique. I think you should march over to Marchesa and tell them you want a knee length version of this ethereal cocktail dress. (Angelic will be a good look after Precious.) If you want to be more traditional with your shape choice, how about this luscious red strapless gown that recently hit the runway at Monique Lhuiller? 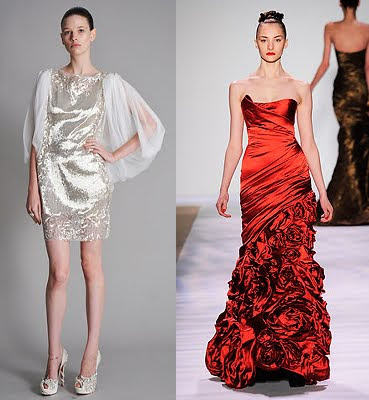 Maggie Gyllenhaal is known for her bold style and I hope she doesn't try to play in safe just because she's been nominated for a big award. I'd lover her to embrace a funky trend like prints, feathers, sheer or shoulders. Chanel recently presented a strong shoulder dress with conflicting metallic and tulle textures. Honestly, it's exactly the sort of oddness I'd expect from this indie queen. Or she could go even further against the flow with an amazing suit like this one from Armani Prive. Do it, Maggie! Make everyone waggle their tongues about how you "dared" to wear pants. 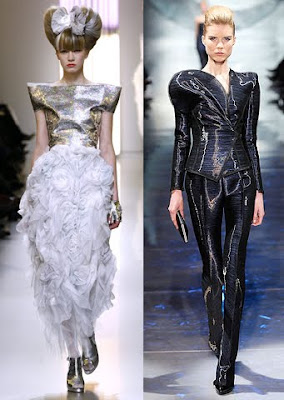