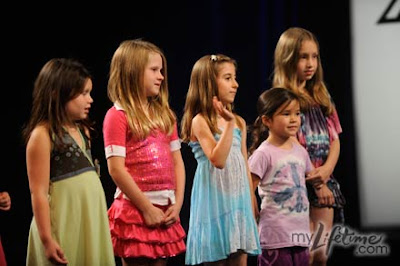 Last night's episode was full of cute. Cute little kids, cute little dresses, even cute reactions from the designers to the cute little kids. The designers had to create a fashionable, age-appropriate look for a bunch of little girls. I believe the girls ranged in age from about five to eight. They had $50 and one day to make the looks. However, at the end of the day, Mila notices they haven't seen Tim and senses a twist.

Of course, Tim comes in the next day to deliver the "good news" that the designer's will not be showing their looks that day, but the next day. However, they would also have a second look for their models based on the little girls' look.

These three designers were among the five safe designers. They were actually pretty nice designs. Ben's design (left) Was stylish, extremely well-made, and probably would have been in the top three if the little girl's dress had been a little better. He might be a dark horse in this competition. He's consistent, which could pay off in the end. Anthony's (middle) dresses didn't live up to last week's winning look, but they were both nice. Nothing to write home about, but nothing to complain about either. Mila (right) did two color block looks. Eh. 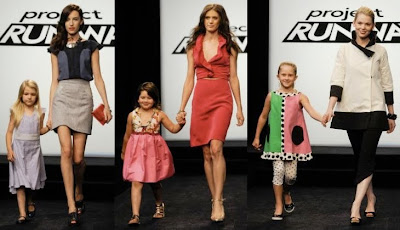 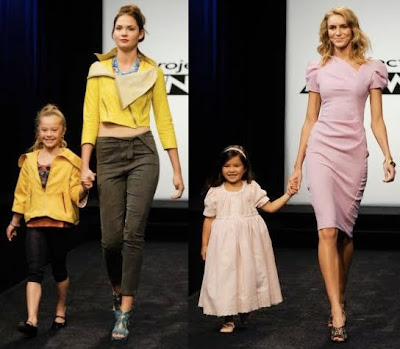 I liked Jesse's little girl look, but I felt the adult look next to it was too jarring. It looked too sexy paired with the little girl look. I felt like I was watching Madeline who grew up to be a lady of ill repute. The judges liked his hair accessory and the fact that he made a tailored wool coat in that time period. They even said the adult look was rocky, but the model pulled it off. 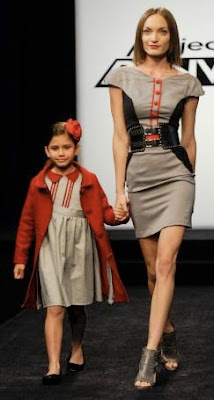 Jay almost won his second challenge with this. The pieces were great. The plum was sophisticated. The techinque was great. I would love to see a mother daughter set in this. Like guest judge Tory Burch said, she would notice a mother and daughter wearing this. 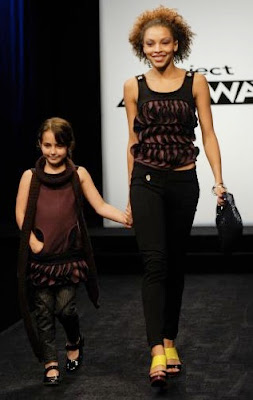 Seth Aaron took a much deserved win. I haven't liked him much until last week, and this week he was by far my favorite. I got to re-watch this episode with friends who agreed this is their favorite as well. The judges said this is the kind of thing a little girl would want to wear, and I know us "big girls" would love to have the striped jacket, which was inspired by the houndstooth in the little girl's look. Mr. Kors said this was the best tailoring they've seen this season, which is quite a compliment since the tailoring has been so good all season. It was also super cute that the little girl's favorite part was the purse he made for her and that he thought to make a purse. 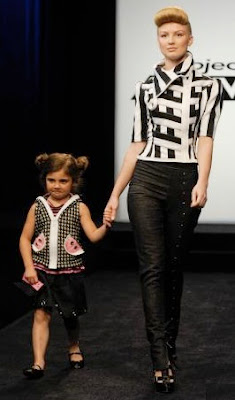 Johnathan decided to take a chance and create something that wasn't safe, but it didn't go well for him. Michael Kors called them the conceptual toilet paper twins. My friend Nathan (who got stuck watching this with me and his wife) said the adult model looked like a goose, but he liked the little girl's look. I think I like where he was going with it, but he just didn't quite end up there. 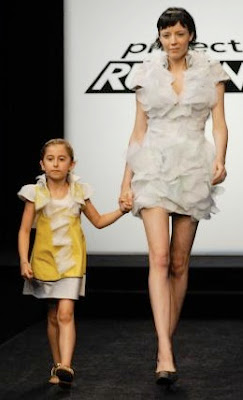 I love Amy. She is one of my favorite designers. I hated the pants she made this week. I actually like the little girl's look, which the judges hated. They thought she look like she grabbed everything in her closet. I still thought it was cute. The judges also disliked the color palette. I liked the colors together. In fact, Tory Burch didn't think blue and orange were complimentary. Hello! Those are my favorite complimentary colors! Anyway, I'm glad she takes risks, but this wasn't a good one. I'm still excited to see what's next from her. 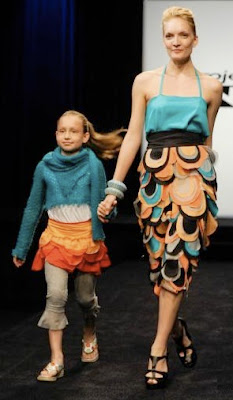 Janeane went home. Her look was kind cute, but I could probably buy it at Target or even at a garage sale. The adult look was poorly made. Tim thought the colors were Halloween. I don't really agree, but they weren't great. I won't really miss this designer. 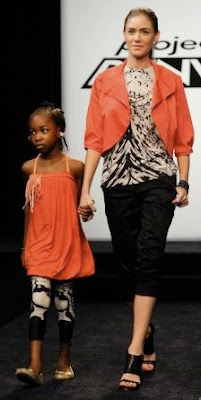 Next week we're off to the hardware store for materials!!! Who do you think will go home next week? Who are your favorites? Did Seth Aaron win you over with this look too?
Project Runway TV + Film

Robin said…
I love Amy- I thought her pants weren't that bad, and that she should have at least gotten props for being different. And yeah- blue and orange not complimentary? Shall I introduce you to a color wheel?

This was one of those episodes that really throws me off- outfits I like are in the bottom or safe, and ones I dislike are praised. Ah well, here's hoping for next week.
February 22, 2010 at 3:38 PM

Charles Smith said…
Who can pick out for me the best product from the list provided in this site?
Wholesale Childrens Clothing
April 25, 2022 at 1:57 AM