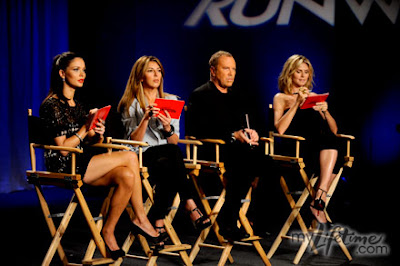 First, I apologize for the delay in this Project Runway post. My building lost TV service just before the episode came on last week, and I moved over the weekend. I've finally had the chance to sift through everything and watch the episode online.

Last week was a moving challenge where the designers where asked to create a red dress for the Go Red For Heart Disease Gala at fashion week. The dresses not only had to be primarily red, but they also had to feature the Campbell's Soup branding and be inspired by their models for the week--heart disease survivors.

I did and didn't like this challenge. I like red dresses, and I love when the designers have to create clothing for women of varying shapes and sizes. I didn't like the requirement to incorporate the Campbell's Soup label, but it did push the designers to be subtle without hiding it. Plus, no one got all Andy Warhol on us so I can get over it.

I'm going to skip the "I hate to dress non-model body types" rant. If these designers think it's so difficult dressing anyone but a size 2, six-foot model, they can't forget selling anything to the average, size 14, five-foot four-inches American woman.

Anthony may not have won the challenge, but he did win for most touching story. His mother recently had heart surgery, and Anthony has been taking care of her. He also wins for doing a great job dressing his model's curves. (He even did so joyfully!). This picture doesn't do it justice, but the model did look quite cute in her outfit. (I expected a gown from Anthony though...)

I'm going to skip the safe designers this week and focus on the top and bottom three. Mila and Maya made came close to wins this week. I admire that Mila didn't rely on her immunity and tried for a second win. I hated her dress on the dress form and thought the stars were cheesy, but it worked on her model. Maya's dress was better for me on the dress form, but it was very interesting. I like her not-too-literal heart on the top of the dress. She took a risk that paid off. 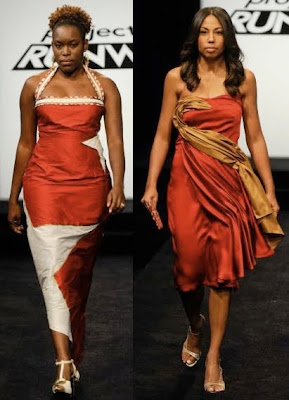 Amy won with this stunning gown. She managed to play down the cheese of adding the Cambell's brand. It flattered her model, moved beautifully and looked like a classic red dress without being boring. I can picture this at the Go Red fashion show.

Anna was accused of making her model look like a linebacker and of creating a dress that felt like a bag cinched at the waist according to Michael Kors. MK said Jesse's look was a little too majorette. Nina thought his Cambell's print pin on the jacket was an uncreative use of branding. Without the jacket they loved the neckline ("Good bosoms." said Heidi). They didn't like the white band around the middle of the dress. Both were safe though because... 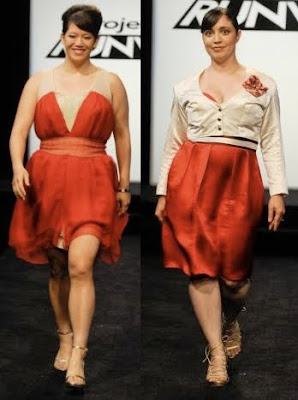 ..as predicted, Jesus went home. The judges agreed that he knew how to construct a dress but continued to question his taste. MK called his look "a checklist of everything that could turn tacky." Tight? Check. Red red? Check. Satin? Check. Short short? Check. Rhinestone straps/deocrations? Check. Contrast side panels? Check. Too much going on? Check and Mate. Bye bye, Jesus.

Last week wasn't that exciting for me. Since they had to create a pretty dress for pretty ladies who have survived a lot of struggles, I understand that the over the top fashion had to be kept to a minimum. It was a heartwarming story week with lukewarm fashion for me. Tonight should be more exciting. I expect to see Anna in the bottom again. Who else do you think will end up defending their looks on the runway tonight?
Project Runway TV + Film

Robin said…
I was so happy Amy finally won. I really, really like her so far.

I was hoping they'd go a bit more Andy Warhol, actually. Super graphic prints. I guess the "real women" might not have liked it as much though. I was dying for an A-line skirt made of the Campbell's fabric, accordion pleated.
February 11, 2010 at 7:19 PM