By Jael Paris - January 19, 2010
After so many designer collaborations, I'm withholding excitement for Zac Posen for Target. No matter how nice the dresses may look, most will have tissue thin fabrics (Rodarte). No matter how roomy the skirt, it won't fit my hips or it will be bum skimming (Anna Sui). No matter how much they claim to be "style for all," Target will limit the stores containing the selection to large cities. They'll limit the selection of key dresses further by giving them to starlets and editors. And of course, they'll open a pop-up store in New York before you can even get the pieces online, because New Yorker's are so hurting for shopping. 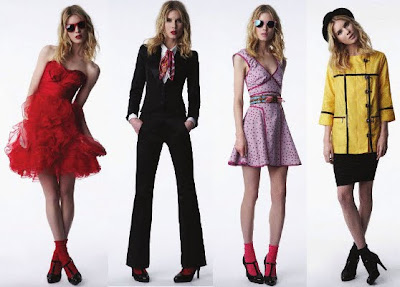 But if I were a hoping girl, I'd be looking forward to the dresses. Zac Posen is a king in this realm, and his two formal dresses demonstrate that. (Bet the red one sells out before the collection is available nationally.) Still in the formal vein, the designer has crafted a striking slim suit. Some pieces feel very period like the 80s glam bathing suits and 60s mod trench. On the not so happy end of things, the gold fabric used for both a dress and swimsuits is just plain ugly as is the neon zebra print.

Zac Posen for Target will hit stores in April. (Jean Paul Gaultier comes out in March. Whither the pics, Target?)
designer Target

Robin said…
I feel like my chances of getting my hands on the pieces I love are so slim I shouldn't even look.

Jael Paris said…
You can do what I did for McQueen, drove four hours to the nearest Target carrying it. Well, I hung out with becca too, so it wasn't just about clothes. But I'm tired of these lines never even coming to my state.
January 19, 2010 at 9:06 PM

Fanya said…
The quality remains to be seen. I saw some Rodarte pieces in a Target near me, and the quality is same as Forever21, and some fabric feels even rougher/cheaper than Forever21's. The only good point is they are longer.

Jael Paris said…
Sui had a great tweed in her collection, but I could see through all the cotton. The wide variance in the fabric is part of my frustration with buying pieces of these collections online.
January 19, 2010 at 9:27 PM

Sarah Dee said…
Finally someone who understands! I was so dissapointed with the designer target lines its unbelievable! Rodarte nearly broke my heart with its cheap fabrics and dont get me started on Mcqueen, Ill continue with etsy and ebay vintage shopping... the qualities better.
Sarah
theantiquepearl.blogspot.com
January 19, 2010 at 10:21 PM

becca said…
I adore the quality of clothing I got from the McQueen collection when I eventually found it (I live in a major Chicago suburb and still had to drive an hour for my McQueen). Had I ordered online though, the dresses I would have ordered had see-through material that wasn't worth the way-above-Target-standars price. Seeing these clothes in person is a must.

McQueen was the first limited release. Before that everything was at almost every store. I few small Targets didn't have all the items, but they had quite a bit. I don't know why they suddenly started limited release lines with lower quality fabrics. My Temperly, Rogan, Patrick Robinson and Paul & Joe Go International clothing is great quality. And it was all purchased at a tiny Target in the Detroit suburbs. What happened?
January 19, 2010 at 11:01 PM