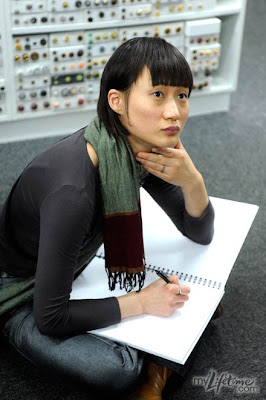 The designers where taken to the Met where a grouping of classic Dior, YSL, Balenciaga, ect. gowns waited for them. They were to take inspiration from these great works of couture and create their own looks...in teams! After the teams got to work Tim Gunn called them in for a dreaded "gather round" to announce they would be making a second look. 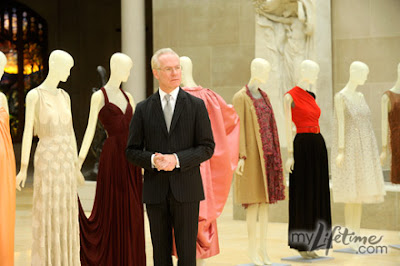 (Thankfully this group of designers didn't feign surprise. They've watched the show. They knew it was coming.) This would be a "look for less." They would have $50 to make it and it would have to be inspired by another team's couture look. This is where the episode got too confusing. Here is a diagram of teams and inspirations:

For the purposes of this recap, I will only be addresses each team's couture look. The looks for less were too bland and unimpressive to matter. Plus, when it came to the runway, the judges complained about the lesser looks, but clearly didn't judge based on them at all.

Janeane (who dragged Ben along for his construction skills) could only come up with this for a couture garment. Blah. The judges like Jay & Maya's Look for Less version much better. It so was. 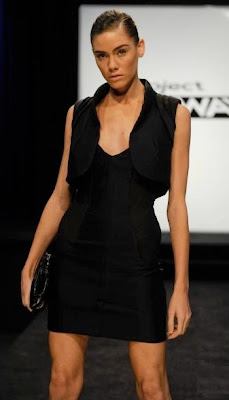 Poor Amy. First Jesus picks her to be on his team. I was pretty sure he'd be going home next so I know she had a lot of work to do to steer his design in the right direction and make sure things were properly constructed. Second, she had to be on the team stuck with getting inspiration from Ping's garment. I never heard her complain. Instead, she got Jesus to help her created a pretty cool dress and a not-horrible Ping-inspired look for less. 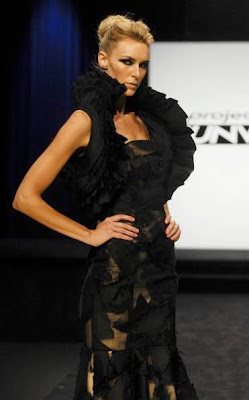 Emilio and Anna are a weird pairing. Anna was far to meek for Emilio. Emilio actually blamed his look's lack of innovation on Anna. He was the lead designer. He doesn't design interesting dresses. It's his fault they just made a pretty dress with no wow-factor.

Jay and Maya came the closest to a power team and also made the best two pieces (which is why I'm showing you both). Had Jay been working harder instead of relying on his immunity, they could have really killed it. Their cool shoulder detail (and the construction that it required) caught my attention instantly on the runway. They also made this little black number based on Janeane's look. It really is much better and much more innovative than Janeane's look. Had the judges actually cared about the second look, Jay and Maya would have won. 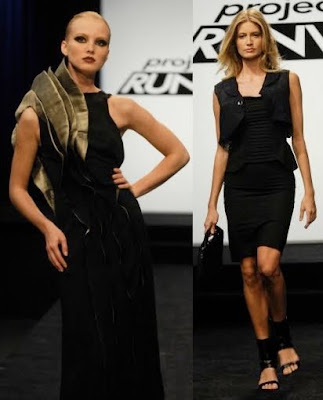 Mila won the challenge. Johnathan wasn't awarded anything, but he is through to next week. Mila's jacket and pants were a unique choice for a week when over-the-top gowns were expected. It was a sweet jacket too. Johnathan complained that he did all the work while Mila just made the jacket, but they were the top team so hopefully he isn't too bitter. It would have been nice for the both to get immunity. Oh well. I am also glad Mila's risk taking was rewarded. Doing a non-gown for this challenge was brave. 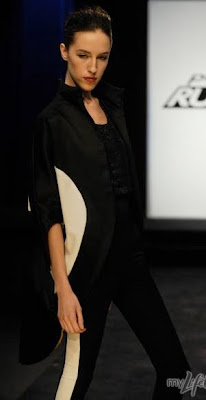 Anthony and Seth Aaron (such an odd pairing!) nearly said goodbye this week. The judges hated Anthony's yellow "Gone With The Wind" costume. They said he didn't do anything to make it modern. Everything lack any vision for Seth's punk style. Nina just called the whole thing ugly. Had their second look been better (or even kind of OK) I would have liked to see Janeane and Ben in this spot because I didn't have that much of a problem with the costume-y, big ol' ball gown. At least they went for something bold. 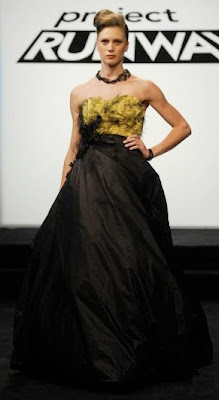 Ping and Jesse were the bottom team. Thankfully, the judges chose just to eliminate Ping because she really wouldn't let Jesse try to save her designs. Plus, he had to teach her how to do nearly everything. Jesse set out to be angry with Ping from the beginning, which just made the whole situation worse. I know she's frustrating, but chill out dude. (I had a roommate like Ping once--nice girl, but she had no idea what was going on in the rest of the human realm). Mila tweeted during the episode that Ping had a crush on Jesse--I wonder if that's true. As for the results of their team efforts, I believe it was Nina who said "I feel like this is just a bunch of fabric wrapped around a model." If the model didn't hold everything up, she would have just looked like she was pooping fabric. Bye bye Ping. You will be remembered in the Project Runway Hall of Wacky Designers.

I'm curious how Jesus will do without Amy's guidance. I also wonder how much longer Emilio, Janeane and Anna will skate by with design-less designs. And will Anthony bounce back from this bottom two experience? What are you thoughts on the contestants' futures? I'm picking Amy, Maya, Mila and Jay as my top four. Who are yours?
Project Runway

Sarah Dee said…
My favorites are jay and anthony. I was really dissapointed with how negative jesse was towards ping, although shes wacky she seemed like a very sweet girl. Im predicting jays going to win!
January 30, 2010 at 9:12 PM