By Jael Paris - January 15, 2010
I can think of no nominee more in need of my styling help than 30 Rock's Tina Fey. Yes, her past dresses have looked nice, but have you remembered any of them the week after? You will wear a freaking color woman! Stop trying to blend into the scenery. The simple cut of this navy J. Mendel gown is outrageously sexy and still sophisticated. Carolina Herrera knows how to frame a woman's figure in a dress that will be remembered -- even in black. 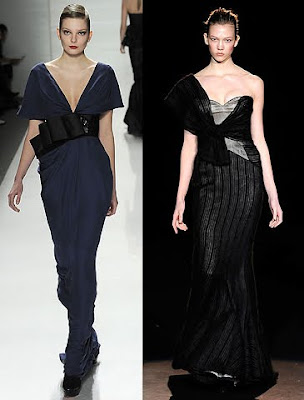 Drew Barrymore is next on the list of people needing my help. Actually, her dresses of late have been pretty sweet, but her hair needs work. So let's pick a dress that will over-power her chosen flavor-o-headsuit. Newcomer Bibhu Mohapatra made a modern princess gown that will have the photogs snapping all night. For a more mature but just as striking dress, Drew should check out this ruby design by another young Brit, Graeme Black. 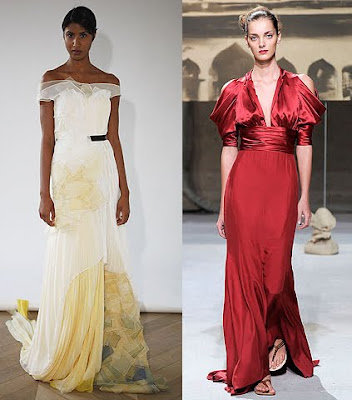 Adorable Zooey Daschanel certainly doesn't need anyone's guidence, but I'd love to have that styling gig! She usually wears something shorter with a vintage feel. Reem Acra's Resort peacock dress is a lovely color and the perfect silhouette. (Please wear better shoes than the model.) But since 500 Days of Summer most likely won't be an Oscar nominee (insert becca's sad face), she may want to turn the glam to eleven for the Globes. In which case, J. Mendel and a sleek updo. 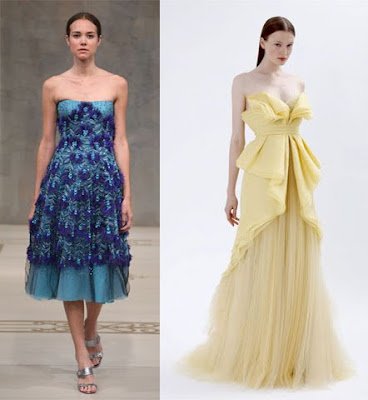 Sandra Bullock is having a golden year, and the lenses will be zooming in on awards night. A lovely floral from Reem Acra would fit her good girl image (and if you've read this feature before, you know I love a print on a formal). From light and soft to dark and heavy, Naeem Khan's embellished black cocktail dress is every inch a woman in charge. 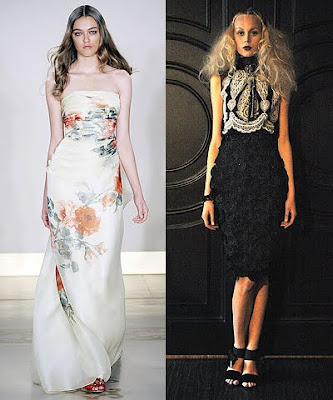 Honestly, I can't imagine Jane Lynch, Glee's hilariously over-bearing cheerleading coach in anything but a track suit, but I'd love to see her in something sharp, sexy, strong and unabashedly feminine. Behnaz Sarafpour and Salvatore Ferragamo have similar designs here, the first the safer of the two. But go bold Jane, because that's how Sue Cs it. 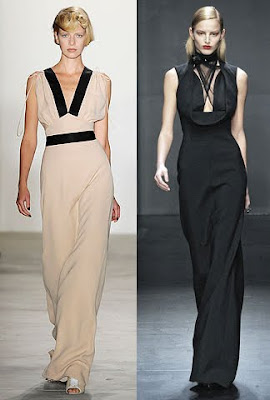 Gallic fashion queen Marion Cotillard will, hopefully, wear an amazing haute couture dress. Cotillard has shown much support for French designers, particularly Jean Paul Gaultier. If she wants to extend that partnership, she should try this soft blue number. And Marion, do wear the necklace. While British, John Galliano certainly has the French aesthetic down (and I'm fairly certain that as the head designer for Christian Dior he gets to be an official Frenchman). I'd love to see this gown from his Spring 2010 show without the drugged silent film star styling. 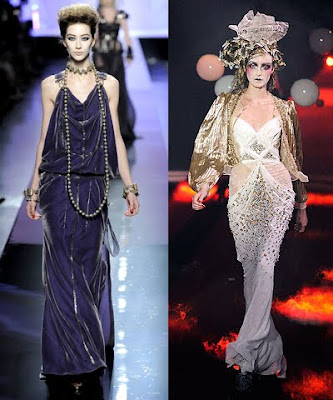 January Jones has been sporting some stunning Versace the last few years, and if that trend keeps up, she'll don something yet to show in Milan. If she decides to give another designer a whirl, she should look of the Brits. Julian McDonald's fractured dress fits her firmly modern aesthetic. With her cool demeanor, she could pull of this feathered mermaid Alexander McQueen even without the over-sized lips. 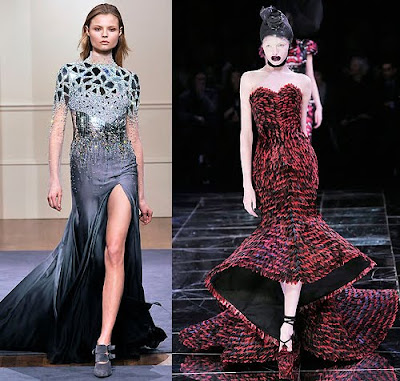 becca said…
I would love to see Tina Fey wear something at least mildly interesting. Your picks are perfect since I know she'll never take too big of a risk.

I love the Zooey picks, especially the Reem Acra dress. (She may still go to the Oscars even if she isn't nominated right? I want to see what she wears!)

...speaking of which the black turtleneck gown with sheer front panel and deep neckline is definitely my favorite. Sexy, discreet, dangerous, femme fatale.
January 16, 2010 at 8:38 PM