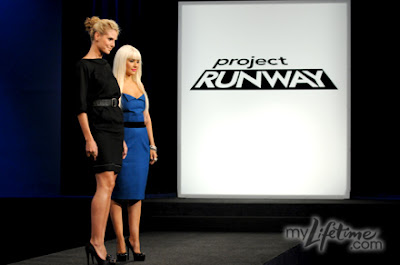 Nina is back! It's so good to have her icy glares and comments on "taste level" back. Sadly, Michael Kors was missing this week, but Bob Mackie did an OK job of filling in. Nina also confirmed to EW.com that next season has already been filmed, it's back in NYC and no one will be missing from the panel. Good news for next season, but I don't know if even a reunited judging panel can save the rest of this season.

The top three looks were all very nice, but Christina is one bold performer and these were far from bold. Althea made a very lovely silver, shiny gown. The gray parts are actually the back of the sequined material, which is somewhat innovative (the judges thought so), but I just hope she lined the dress or that would be uncomfortable to wear. (By the way, if you haven't watch the show and you're judging by the pictures. They are all way off. I don't know why Lifetime has such horrible pictures. Often, the good designs look awful and the bad ones don't look nearly as bad as they did on the runway). 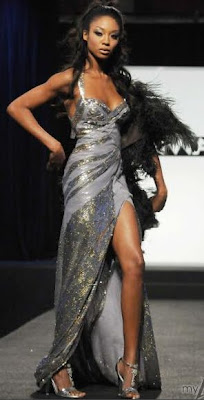 This challenge nearly sent Nicolas over the edge with glee. He gushed and gushed about sequins, sparkles, feathers and so on. When Tim Gunn came in to critique the outfit, he recoiled once he figured out Nicolas hadn't brought over his winnning "Ice Queen" look for inspiration and this look-a-like garment was his new design. Nicolas did a little to make it less like the "Ice Queen" look, but ulitimately he got away with it because the judges have been different each week. Nina and Michael love to point out repeats, which is what would have happened had they been there all season and it would have landed him in the bottom three instead of the top three. Nicolas' dress wasn't bad, but I don't think it was great either. It looked like an ice skating costume, but at least his looked like a performance costume of some sort. After all, that was the challenge. 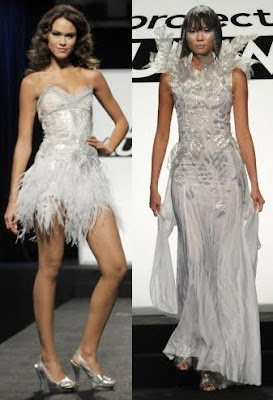 Carol Hannah won! Finally some love for Carol Hannah! She has been consistently good, but none of her looks have earned her much attention for the judges. While I find it sad that this was the best "Bob Mackie" dress the bunch could make (who else misses Chris Marsh?), it is a great dress and was my favorite of the night.

Before we get to the worst of the evening, lets talk about worst attitude with mediocre style--Irina. Her dress isn't pictured here because I can't remember what it looked like, and I don't care. She spent the entire episode bitching about everything and every one. She hasn't been looking for friends all season, but now she's looking for enemies. Even Nicolas, who dishes out more than his fair share of biting comments, thinks she has her claws out too much. Nothing about her personality is even enticing in a "love to hate her" kind of way, like Santino. Santino made interesting clothes to back up his attitude. Irina is just standing on her attitude. I hope, for Project Runway's sake, she doesn't get too far in the competition. No one likes her.

Logan, "meet the Flintstones. They're the modern stone age family." Now, meet Christina, who you admitted you didn't know much about. She's no Wilma or Betty or even Pebbles. She could pull off a sexy, female Bamm-Bamm, but that's not what you made. Make the skirt shorter. Make the pink lining show. Use bigger chains, and not just on the side. Stop flirting with Carol Hannah and add some sequins or crystals. (Why wasn't this challenge sponsored by Swarovski, by the way?). I've liked Logan most of the season, but two weeks in a row he has disappointed. Pull it together buddy or you'll lose you're workspace next to that "funny little southern belle" who told the camera how hot she thinks you are. (I, however, think you're just kinda nice looking).

Christopher! What happened to you? Nina questioned your taste level this week, and she had every right to do so. They kept saying your look was a Lady Marmalade repeat (Nina pronounced Maramlade like the fruit preserve, which made me giggle), but I think that was too generous. The hooker wearing this outfit, would not have black satin sheets or get paid in diamonds, which is why Bob Mackie wouldn't even put this on a backup dancer. The Pussycat Dolls came up in judging, and that's just bad. Christina gave you an "e" for effort, but I have to give you an "e" for ew. Christopher, I want to cheer for you. I want to keep calling you a favorite. You are making this very hard for me. I think you should have been sent home based on this design and considering Shirin's track record. Please use next week as a chance to remind me why I liked you in the beginning.

Shirin is out. Her dress was really bad. Tim Gunn called it "Guinevere meets Vampira," "student work," and "really bad prom." Ouch. However, Shirin has never been in the bottom three before. She has exhibited much better taste overall (top three last week!) where Christopher and Logan have been repeatedly bad. This is another fault of not having consistent judges. Yes, her dress was probably the worst of the week, but it seems a shame (as much as I like Logan and Christopher better than I like Shirin) that she went home. Stop by Ew.com's Project Runway Talk to hear what Shirin had to say about her elimination.

What did you think? Did the judges make the right choice? What happened to Logan and Christopher? Where there any great stage looks? Who's missing Ra'mon more than ever?
Project Runway TV + Film

Unknown said…
I thought Nicolas should have one because it was a beautiful dress and looked exactly like something Christina would wear. I loved Althea's though too, it flattered the model's figure very well. I love Logan but his seemed more like something Pink would wear. Chris is one of my faves but he just didn't do well this week. :-( He's been slipping lately.
October 17, 2009 at 2:54 AM

Jael Paris said…
The winning dress is great as a red carpet dress, but it would lose something in the distance of a stage.
October 17, 2009 at 7:49 AM

Robin said…
God, what a season. It's painful. I get way too excited any time someone says they can't handle the pressure of the competition, because I'm hoping they drop out and the show has to drag back Ra'mon or Epperson to save their asses. A girl can dream.

Irina is about to annoy me to the point where she beats out Nicholas for person I wanted axed. I agree- get some talent to back it up or be quiet.

I actually liked Logan's outfit a lot. It could have pushed the envelope more, but I would wear it. I loved Christopher's jacket, but the underneath looked like a cheap sex store costume. You can do better!
October 17, 2009 at 8:24 AM

Poodle Bitch said…
Poodle Bitch likes the poodle companion Irina very much-- she has been the most consistent in her designs and execution. She is clearly ahead of everyone else.

Poodle Bitch doubts that Irina had any say in how the producers cut together their hours of interview footage.

Poodle Bitch does not believe the producers or judges are taking this season seriously. Epperson and Shirin sent home two weeks in a row, while Christopher, Logan, Gordana, and Althea remain to perpetrate more mediocrity? Absurd.
October 17, 2009 at 11:47 AM

Rachel said…
I agreed with the winning look (gorgeous!), but honestly think Christopher should have been eliminated. As much as I like him, the last few weeks he's just done a really bad job. I was shocked when he was allowed to stay. I wish we would see more consistency with the level of work from each designer week to week. Thank goodness for Carol Hannah.
October 19, 2009 at 10:22 AM