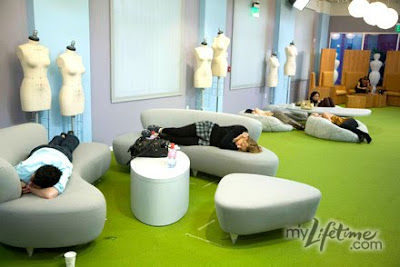 Before beginning our regularly scheduled Project Runway coverage, I would like to take a moment to do a ridiculous looking happy dance for the return of Michael Kors! (If Nina had returned this week as well, I might have made a fool of myself by showing you the happy dance, but alas, Nina's chair held just another non-Nina Marie Claire employee.) Also, Tim Gunn wore jeans this week!

Back to the designers (who, pictured above, even got bored this week). They were told to pitch ideas for two blue looks to fit into the Macy's Inc. line. Some random Macy's employee chose the top five sets of sketches and made those designers team leaders. In teams of two, the designers had one day to create both looks. The winner would not receive immunity but would get to design a "holiday" dress to be sold at select Macy's stores and online.

The designers fail at the use of blue. A few even complained about blue. Are they crazy? Blue is great. FMF readers voted it the most prominent color in their wardrobes. I'm even working on a post about great blue clothing (coming soon!). They did not work the blue. I was bummed. I liked where Althea and Logan were going with their looks, but they didn't quite make it. In fact they were the only team not judged.

Carol Hannah and Shirin came in second. As I'm writing this I actually can't remember what their clothes looked like. I have to go look it up. I'll be right back.... Oh yeah, cute pencil skirt with blouse and cute-ish weekend dress/shirt thing with leggings (Tim does not like leggings). Not bad. Not great. It was a sad, boring night in the top two. 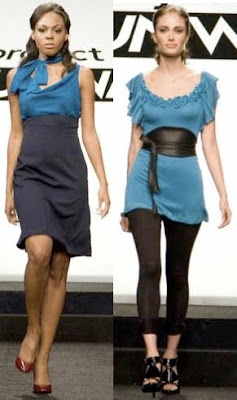 Irina and Gordana won. Their outfits were nice. They did not work well as a team, but could Irina really work that well with anyone? She doesn't seem to like anyone or anything but herself. Sadly, these probably were the two most interesting looks of the night. I know Inc. is a basics line, but the clothes are more exciting than this! And the line is great at using color in an exciting, eye catching way. These looks are nice, but I barely remember them the next day. If this is all the Inc. look book inspired, Macy's must have had a bummer line this season. 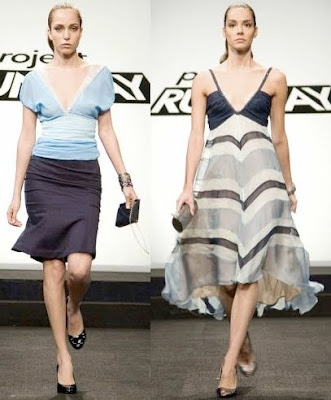 Here is Irina with her "holiday" dress (the holiday dress is the one with the butterfly). Click here to be alerted when it is available at Macy's. Although, I only want to be alerted if anyone (aside from Mariah Carey) actually buys it. If I wore this at the holidays I'd be freezing and rather dull looking. What do you think? 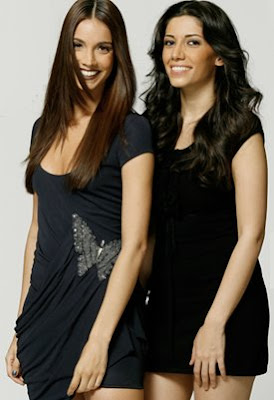 Christopher and Epperson were too busy being excited about what a great team they were to actually make a great team of garments. Epperson spent several minutes talking about she-who-will-not-be-spelled and what a bad leader she was, which spurred Christopher to rejoice in their collective awesomeness. I love Christopher. I want to see him at Bryant park, but this was a bad week. I'm just glad he didn't go home. The outfits did not fit together and didn't look good individually either. 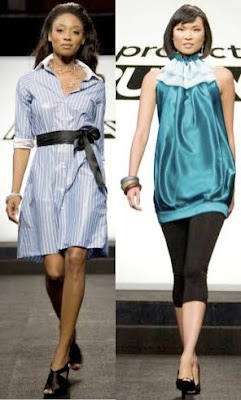 Louise (aka she-who-should-have-left-last-week) must have fallen on her head before this challenge. She managed to snag a team leader spot then ruined her chances by picking--PICKING, not getting stuck with--Nicolas (aka guy-I-want-out-of-the-competition). She also nearly lost her sketches at Mood, which would not have been a loss seeing what she designed with them. Nicolas hated her designs (why did she pick him?!). He bemoaned the very existence of ruffles. He whined a lot even though he didn't really need to care because he had immunity this week. I love ruffles, but not these ruffles. Michael Kors said of the second dress "This truly looks like a bridesmaid's dress with a shower loofah ruched up the front of it." I actually like shower loofah ruffles, but not these ones. It was bad. Louise went home. I don't feel any sense of loss. 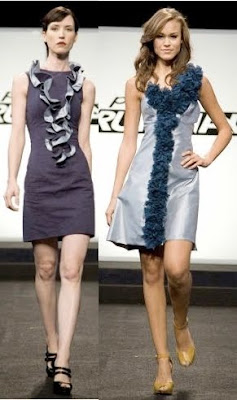 Actually, I don't feel much of anything after last night's episode. It was kind of boring. It would have been downright snooze-worthy had Michael not been back and had Tim not decided to take a walk on the casual side. I look forward to something more interesting next week. However, I used the boring show time to choose my dream team top four (even though I don't know that it will turn out this way). Here they are: Christopher, Althea, Logan and Carol Hannah. Who would make your top four?
Photo Source: myLifetime.com
designer Project Runway TV + Film

Jael Paris said…
If the loofahs were concentrate on the top, it would have been the best dress. They're all so dull! It seems Macy's has moved from hating Midwestern shoppers to hating all shoppers.
October 2, 2009 at 5:21 PM

kylsie said…
I totally agree- booooring. I was peeved that Nina wasn't back, but at least we had Michael. I'm still mega-bitter about Ra'mon going and Babygirl staying last week (she's so dull I keep forgetting her name). I also despise Nicholas. I was really afraid when they threatened Christopher and Epperson- had they cut them, I would be out of designers I like. I'm still hoping for a surprise return of Ra'mon. Delusional? Maybe. It just seems like even more of a waste now that Babygirl proved she's as boring as she seemed last week.
October 2, 2009 at 5:44 PM

Poodle Bitch said…
Poodle Bitch was happy to see that the poodle companion Irina won- her team's dresses were far and away the best, and Irina is the clear favorite, to Poodle Bitch's eye.

She wonders why it is that Irina should have to "play well with others," when she is so far ahead of the others with her style and designs.

That said, Poodle Bitch has been sorely disappointed by the judging this season. Ra'mon clearly should not have been sent home last week, just as Mitchell should not have made it to the third episode.
October 3, 2009 at 12:12 PM

Rachel said…
Yeah, boring. I like but don't love the winning dress with stripes. I am glad Louise was the one to go home (HATE the loofah dress) and was momentarily scared that Christopher was in the bottom two! The shirt dress kind of flopped which is sad because I liked how it looked on the mannequin, and I thought the other dress he designed was OK... but obviously the losing looks were waaaay worse.

Irina's holiday dress looks like something I would have picked out in middle school. It's boring and bla. Definitely not a holiday dress.

My top pics are the same as yours. I really do like some of the other designers' styles though... Epperson and Gordana both have strong personal design styles which is cool.
October 6, 2009 at 2:19 PM