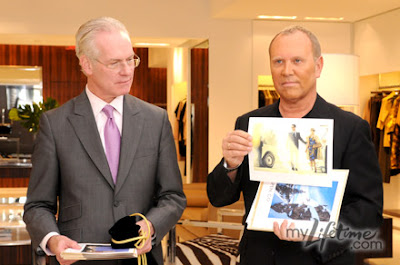 Tonight the world of Project Runway was restored to it's proper order. All three judges were back and Milla Jovovich was excellent as a guest judge with some good input and even better quips. The designers were challenged to choose one of the locations that had inspired Michael Kors and use it as inspiration for a look that showed who they were as a designer as well as the essence of their chosen place.

I liked the idea of the challenge, but I felt it was a little dull for a challenge this advanced in the competition. I've felt the challenges have been tame all season. The designers have also produced very tame looks all season. This makes for boring TV.

Althea chose St. Tropez as her inspiration. Her look was the only one that didn't get judged. It was nice, but not remarkable.

Gordana had Park Ave., New York City as inspiration and found herself in the top three. She did a sporty-chic dress with fabulous and removable neckline/necklace. The judges told her she needs to be more confident both with her designs and how she sells them on the runway. 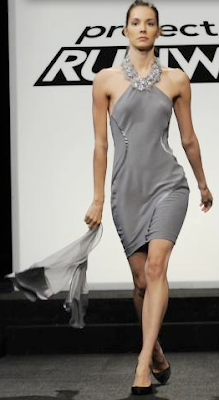 Carol Hannah won last week so she got to choose first this week. She chose Palm Beach and created a dress that truly lived up to her location. The details on the top of the dress took it from typical Maxi dress to something special. The judges raved so much I almost thought she'd win two in a row.

Irina is far from my favorite designer. However, her Aspen inspired look was by far my favorite of the night. I want it. I want to live in pieces like that all winter. She deserved this win. I do think the judges had a point when they said it needed something extra to push a little further, but that's been the problem with everything all season.

Logan was supposed to take his inspiration from Hollywood. Instead it looked like he took inspiration from the basics tables at Kohls. The look was not original or interesting. Michael Kors said, "They're clothes. They're not fashion." Heidi kept saying she didn't really mind the look, but Milla responded, "If this was called Project I Didn't Mind It he would win." He was safe, but he has to do something next week. At least he redeemed himself as a pants-maker.

Christopher has fashion angels watching over him. As much as I love him I really think he deserved to go home this week. He has been off for too long. Not only did his look not invoke Santa Fe, it was poorly made and sad to look at (somehow it's photographing better than it looked on TV). The belt was the only redeeming factor, which the judges complimented. But the judges called it unwearable, and I agree.

Nicolas went home. I've been waiting for this for weeks, but I almost feel a little bad about it. His look was really well made and the top was lovely (the picture doesn't do it justice). It just wasn't Greece. Michael said "I think you got the wrong Greece. I think you got Grease the movie." I don't think Nicolas should have made it this far so I guess those fashion angels looking over Christopher were just correcting the mistake of him making it this far. With the week by week judging we've seen all season, it only seem fair that Christopher should have been axed this week (even though I like him--although not as much as before). At Nicolas' exit Tim said "You work was beautifully executed. It was a matter of taste." Tim isn't usually this complimentary at the end. It was clear he didn't think this was the challenge that should have sent Nicolas home.

I think the best three remaining designers are Althea, Carol Hannah and Irina. I really want Logan and Christopher to step it up because I really liked them in the beginning. Gordana has been doing better, but she hasn't wowed me at all.
Project Runway TV + Film

Robin said…
I totally agree. I have been dying for Nicholas to go but actually wasn't jazzed when it happened. I loved Christopher at the beginning but he's been bad for weeks. I was stunned he got to stay. And yes, Irina is deeply unpleasant and unlikeable. But I agree her outfit deserved to win this week.

They've kicked off all my favorites, so now I'm more watching out of curiosity. I'm hoping the designers step it up- this has been the tamest season ever.
October 23, 2009 at 11:45 AM

Unknown said…
I love Christopher but he really needs to get back to where he was the first few episodes. His designs are seriously lacking now. I never cared for Nicolas but I didn't feel like he should've been the one to go home this episode. His outfit wasn't very "Greece" at all, but as just an outfit I actually loved it. It fit the model's figure beautifully.

Irina's was my favorite. It was just beautiful. She has the best designs, but she's far from being my favorite simply because her personality is so off-putting.
October 23, 2009 at 2:46 PM

Rachel said…
I agree with everything you said.

Irina definitely had the best look.

It's time for Christopher to go home... he made 3 good outfits and it's all been downhill from there.