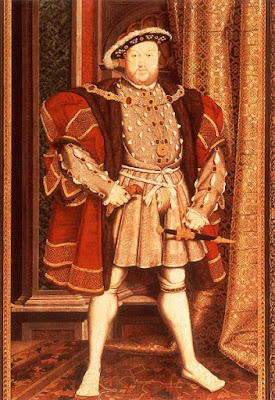 I've been watching the Showtime series The Tudors on Netflix and am surprised by how easily the distinct clothing can be reinterpreted and still worn today. (Yes, I'm aware the show's costumes are not entirely accurate (neither is the history), but I'm not focusing on specks and details either.) For example, sleeves that looked like cages were quite fashionable. Cages are certainly popular today, though mainly in the form of shoes. Cutouts and slashes were another popular trend in the 1500s, and people would use them as a means to display their fine undergarments. (My roommate studies costume history and informed me that Italy had laws about the amount of fabric that was allowed to be used in the sleeves, but they didn't have rules about undergarments, thus, the slashing of the sleeves and the puffing out of the underwear.) Cutout clothing is one of the biggest trends right now, and you could think of it in these older terms rather than as a means to show as much skin as possible. Many a quilted jerkin bore studs because men throughout history have wanted to get their rockstar on. The final touch was massive jewelry, preferably pinned at the shoulders.

Avant Tudor by Fashion Me Fabulous featuring Lanvin necklaces
Ruffles were en vogue as they are by nature a means of using excessive fabric. Pants had not yet been invented, so all the men were a bit hippy. (Thankfully, The Tudors glosses over the stuffed cod pieces of the day.) Sleeves were always elaborate in some way, and the best means of layering with puff sleeves is with a vest. Frequently, one or more of those layers would be brocade. Ladies frequently wore feathered, jeweled or velvet headpieces, easily translated today as headbands. Add some rich jewelry in bright pops of color. And don't forget boots to muck about while hunting.

Frankly, I Like My Head Where It Is. by Fashion Me Fabulous featuring Dorothy Perkins
inspirations

Ms. B @ Millie Deel said…
Haha, great post! I love reinterpreting fashion history, in fact, I had to take a whole class in college that was all about that! I wanna see guys wear codpieces again ;)

Anonymous said…
The first picture posted instantly reminded me of a post that my friend wrote drawing similarities between Henry VIII and Eminem in the intent behind the fashion.
http://whirling-woman.livejournal.com/71756.html
July 25, 2009 at 1:43 PM

Antonia Rosina said…
Yes, guys in codpieces would definitely be cool Ms. B. The Tudors is so far off "fact" that it is funny to watch. With Joss Stone as Anne of Cleves, it should be even funnier. But oh those costumes. I attended a Tudor wedding recently and the bride wore burgundy. Just beautiful! I'd take Jonathon Reese Myers in a sack. Great, fun posting...thanks!
July 27, 2009 at 11:48 AM

Unknown said…
Great Polyvores! Anything with rich fabrics can be an inspiration from The Tudors. Love that blk coat you have listed!
July 27, 2009 at 8:25 PM

Lady Angela Boleyn said…
Thank you so much for this, I've been hunting the internet for ways to modernise Tudor clothing. This has given me so much inspiration.
January 5, 2012 at 7:05 PM