Project Runway vs. The Fashion Show 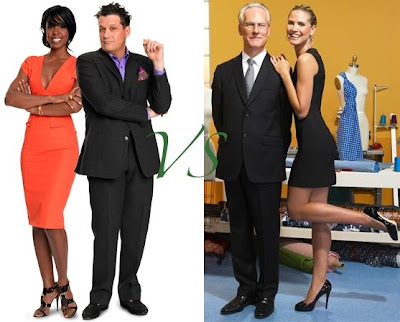 Project Runway is making the move from Bravo to Lifetime after a bunch of legal arguments that left everyone wondering if Project Runway would ever appear again. It's sixth season will run on Lifetime staring August 20th, which is much later than I expected.

Bravo didn't want to lose the show so when it did, it created another one--The Fashion Show. No bonus points for name creativity. It's technically not identical to Project Runway (techinically, but really, it looks like it is). There are 15 constants who compete in two (instead of one) weekly challenges. One is a mini challenge from Harper's Bazaar judged by someone from the magazine. The Fashion Show debuts on Bravo May 7, 2009 (Thursday!).

Isaac Mizrahi is the host. Kelly Rowland is a judge(?). And Fern Mallis of IMG Fashion is the judge that's actually credible. I'm assuming Isaac is judging in some capacity. I also assume Kelly is really more of a co-host than a judge.

I trust Bravo with a fashion design show more than I trust Lifetime, but I wonder if Bravo can make a good enough copy to surpass the original. Which do you expect to be the winning fashion show?
designer Project Runway TV + Film

Kim/ said…
I think there is room for two project runways (i know there is space on my Tivo for it) Really the new version with Isaac Mizrahi on Bravo will depend on the contestants. If they get talented, creative designers, I think it will be a hit. Oh, and the judges need to make sure they are as brutally honest as Project Runways. Other than the creations from the designers, that is the best part of the show.
May 5, 2009 at 12:44 PM

Jacket said…
I have to rent all my cable shows on netflix. so i may not be in the most knowlegable position here, but i think that project runway should have quit when they were in the high...and well i think people will definately try out the new Bravo show. I'm house crashing for the premiere.

kylsie said…
I'm excited by the prospect of a new fashion show, but I'm bummed about Project Runway being shuffled around and maybe losing its spark. I've always liked the fun, sleek way Bravo handled it. I'll watch the new show, as I have nothing but love for Mr. Mizrahi. But I'm kind of bummed I'll have to go track Project Runway down.
May 6, 2009 at 11:08 AM