By Jael Paris - March 11, 2009
At first, I thought it was one misguided designer. Then, I was certain it would end in New York. No. We've wrapped up Milan, moved on to Paris, and the gorilla arms still abound. 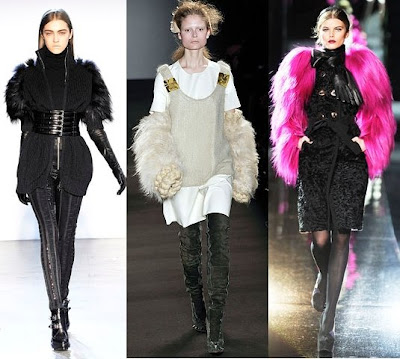 Gorilla arms at Phi in New York, Giles in London, and Dolce & Gabbana in Milan.
Whether made of knit or fur, in part or full, focusing so much mass in just the arm looks ridiculous. Let's hope this trend stays on the runway and out of stores.

Anonymous said…
I can handle the first incarnation- it's a little wicked witch, but cool. Then it gets progressively worse...
March 11, 2009 at 10:29 AM

Jael Paris said…
I've seen that hairy furriness used in other ways -- coats, out-there dresses -- and I liked it. Limiting it to the arms is the most random thing I've seen this season.
March 11, 2009 at 10:53 AM

Anonymous said…
It's bad! Shame on the designers. Hopefully Forever 21 doesn't decide it's a good look. Next thing you know, tween gorillas will be infesting the mall.
March 11, 2009 at 11:17 AM