By Jael Paris - February 18, 2009
Once again, I'll be giving red carpet attire suggestions for some of the nominees. This time, it's the Academy Awards, and while it has delivered great fashion moments via Bjork and Cher, it's generally tame (tame in a miles of chiffon and million dollar jewels sort of way).

I had a dress all picked out for Kate Winslet at the Golden Globes, but decided to hold off since I knew she'd be nominated for an Oscar. But she can't show up in this ice blue, zip-edged Versace since January Jones wore it at the Globes. 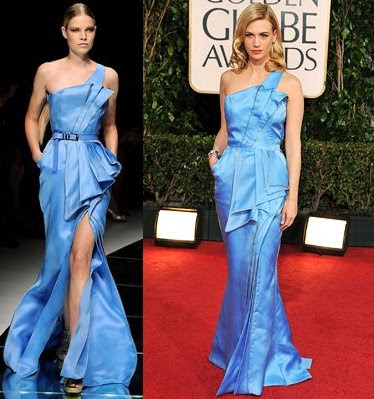 Gah! Jones looked fabulous, but I had to start looking again. And let me tell you, there are shockingly few dresses that seem like they would work on a bold, classy, curvy Brit. Maybe it's just that I love Kate and set the bar too high for the "perfect" dress.

Kate tends to wear something simple with a twist, so she could take this yellow Oscar de la Renta dress and make it the most stunning thing in the crowd. becca is rooting for the slightly ruffled silver gown from Rachel Roy's most recent show. While I usually avoid them in favor of more edgy designers in these posts, I hope she wears this jewel-trim dark olive dress by Badgley Mischka pre-fall. Which ever dress she picks, she should make sure it doesn't show tear stains as Kate's been sweeping all the other awards. 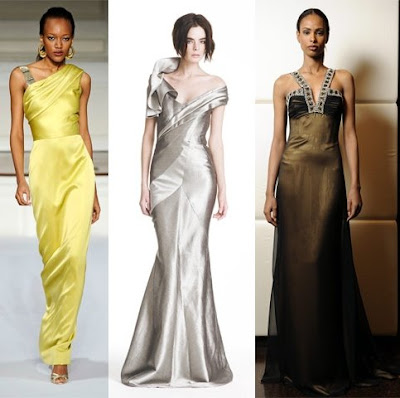 Undoubtedly, Angelina Jolie will wear something neutral and boring. I understand that she has quite the brood, but this is why celebrities hire stylists. While I still think she'd look fabulous in the dresses I picked out for her Golden Globes appearance, I decided to keep looking.

Angie can stick with a neutral but glam up the cut of the dress. Versace showed this sexy, shiny chocolate gown at their last couture show. Exposed back and a leather look? How Angie is that! Naeem Khan's sequin and ombre dress is another good option. The orange can living things up while the sequins draw attention to the, um, face. Yes, the face. 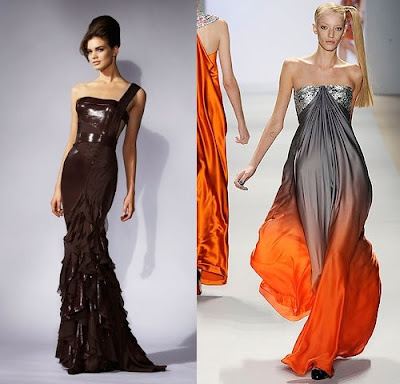 Judging by Meryl Streep's usual red carpet attire, she'll be rather modest and will keep her upper arms covered. I suggest she wear something simple and put the drama in accessories. (Streep seems to be a jewelry fiend.) Some of the dresses in her style are already jewel trimmed. This caftan variation from Valentino haute couture would still show off her lovely figure while covering what she wants to cover. Blumarine's coral trimmed dress is an oh-so sexy option. 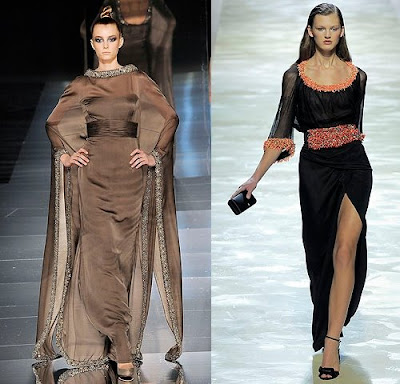 Marissa Tomei has been wearing unusual designs while promoting The Wrestler, so I'm hoping she continues her daring streak. I loved London designer Roksanda Ilincic's spring show, but only a bold woman can pull off those dresses. Marissa wears what she loves and ignores fashion critics, making her the perfect person to try Ilincic. She's also confident enough to pull off a print or pattern in that sea of solid colors, like this bird print from McQueen SS 07. Perhaps she could even try Albeta Ferretti's heavily embellished fringe and mirror dress. 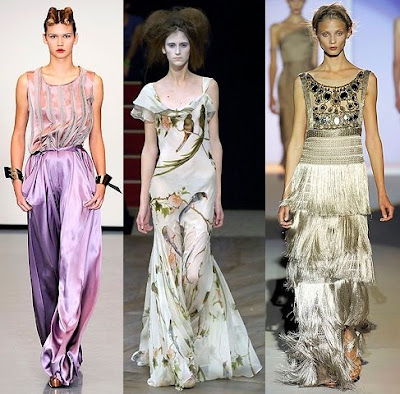 Anne Hathaway could take a lesson or two in boldness from Ms. Tomei. The former Princess needs to wear an adult gown that says, "This nomination is not a fluke." She's favored mermaid tail gowns before, so I highly suggest this dramatic garnet gown from Alexander McQueen's Pre-Fall show. For a bit of sex appeal, she could try the plunging neckline from Reem Acra's latest show. The dress is actually a taupe color, but Anne looks better in bolder colors. I don't know if the black part is a necklace or part of the dress, but I like the idea of filling the void.

Amy Adams wore a pretty black gown at the Golden Globes, and since her role in Doubt has her dressed in conservative black the entire time, I'd love to see her in a bold color or a sexy cut. Zac Posen's 1930s themed pre-fall show is perfectly playful and has a great color scheme for a redhead. I'm torn between this minty retro number and the sassy orange fringe dress. Who am I kidding? Always go for sassy!

Of course with New York Fashion Week in full swing and with more stylish cities to follow, a starlet could throw me for a loop with a yet-to-strut-the-catwalk gown.