By Jael Paris - December 31, 2008
I love year in review shows and magazines. Best and worst lists, however, aren't really my cup of tea. As you've gathered from reading our award show reviews, we like something a little different, expressive of personality, and memorable. Here are the looks that I can remember months later.

Several performance looks stuck out this year. Beyonce's "Sasha Fierce" look at the MTV VMAs was a variation of one of my favorite Gareth Pugh shows. Fierce indeed! Rihanna, likewise, used clothing to alter her image for a new song, and her VMA look was delightfully deranged. Also rocking at the VMAs was Pink in the most delicious trench ever. 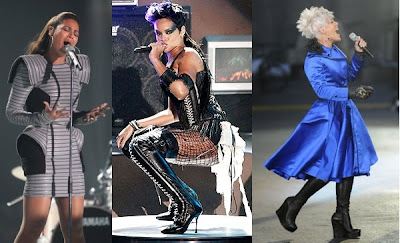 Sarah Jessica Parker showed up on several worst dressed listed for her Sex and the City London premier ensemble. People liked her Alexander McQueen dress well enough, but the Philip Treacy hat was reviled. Personally, I liked it. It's daring and fun, and it's that what her character was known for? Most telling, I can't recall what any of the other stars wore to that event.

Marion Cotillard was another red carpet star in her fish scale Gaultier for the Oscars. She demonstrated that texture and an obvious reference doesn't have to end up as a fugging. Helen Mirren also rocked the Oscars with her lovely, jewel sleeve gown. Take that young'ins! 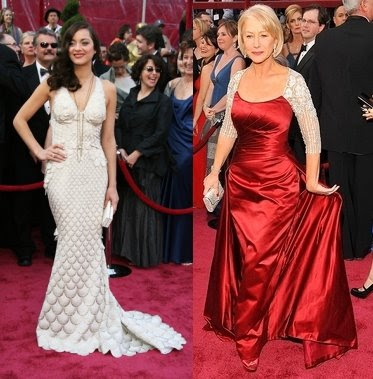 What was your favorite fashion moment in 2008?
celebrities

becca said…
The fish scale Gaultier dress is probably my favorite look from this past year.
December 31, 2008 at 3:03 PM

فروشگاه اینترنتی said…
It is really amazing and has shown a good performance
فروشگاه اينترنتی
https://www.baneh.com
goodluck
October 24, 2019 at 2:41 AM