By Jael Paris - September 27, 2008
What's this?! A Saturday post! Due to my internet being a booger yesterday, I wasn't able to write about all the Milan shows I wanted to write about. Lucky weekenders, getting extra fashion goodies.

Maurizio Pecoraro's collection was ruffled, satiny, sequined, jeweled, polka dotted, neutral, hot pink, and silvery green. Needless to say, it wasn't cohesive. While not a break-taking show I'll look at again and again, there were plenty of pretties no woman would mind wearing. His show also contained what is becoming one of my favorite trends for spring 2009: satiny rolled pants. 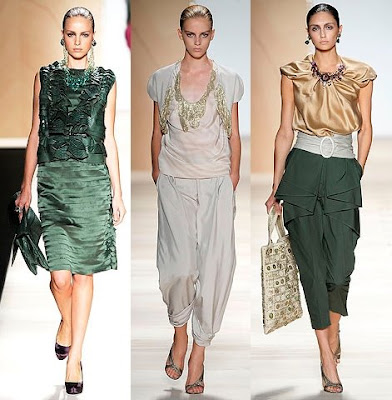 I adore Gareth Pugh's zippered warriors from Fall/Winter 2008 and 3.1 Philip Lim's more romantic take on utility. I'm also lusting after one of OustaPop's zippered collars (yes, Susie, I'm deeply jealous). If you're a zipper fan too, Versace's show was for you. Donatella's take on the trend was feminine like Lim's but toned down to the point where the collection will appeal to most women. I really liked the print she used in the middle of the show, but it felt like a random insertion compared to the cohesiveness of the zippers and hearts. (Why no zippy, bathing suits?) 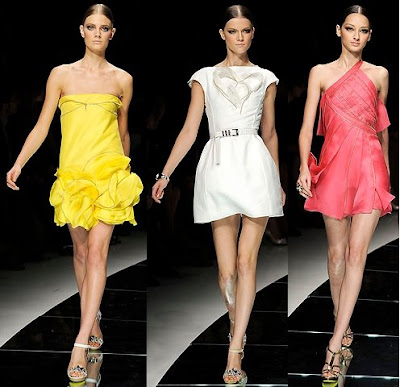 Judging from our decades poll, only a few of you are inspired by the 70s. I don't have the body to pull off those long lines, but I still love the fun woven into the clothes. So it's no surprise that Dsquared's Charlie's Angels show exhibited spunk and sass that most runways miss. I really want the straight leg, dark wash jeans. However, if that parachute cargo dress ends up in stores, it will go directly to the horror gallery. 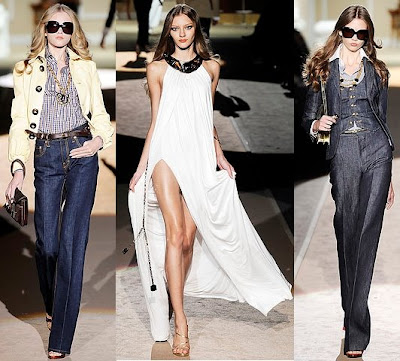