Color: A Natural History of the Palette 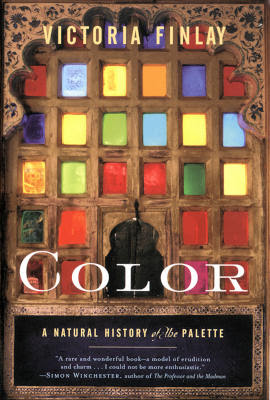 Details: Color: A Natural History of the Palette by Victoria Finaly

was published in 2003. The author focuses on popular pigments and dyes of the pre-synthetic era. In addition to covering art history, the book is part travelogue.

If you're curious about the history of colors or want to know more about making organic dyes, this is a must read.

Pros: I'd never thought before what goes into making a dye and how frustrating it would be to see a color in nature and not be able to reproduce it anywhere else. It's amazing how many people died in the pursuit and trade of color.

I'd also never thought about the difference between pigments and dyes. For example, in Jan van Eyck's The Arnolfini Portrait, it would have been impossible for anyone to have that color of green cloth at that time; thus the choice of color for the wife's dress must be seen as purely symbolic.

Cons: Finlay frequently veers into speculation, but at least she's clear about it when she does.

The chapter on orange focused exclusively on violin varnishes.

Favorite Tidbits: The only dye made from leaves is indigo. Most organic dyes are made from bark.

Carmine, color additive E120, which is in your red lipstick and cherry Coke, is made from the blood of conchineal, a parasitic bug. (Pictured at right.) 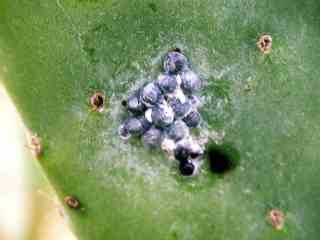 Mummy brown, a popular pigment of the Pre-Raphaelites, was actually made of human corpses.

For centuries, purple was a mourning color in England.

The most common method of dying black clothing is dying it several colors until it appears black. Before the invention of synthetic dyes, this was an expensive process. This is why your black clothing fades so irregularly. The best organic black dye is made from the sap of the logwood tree and was traded by retired pirates. Puts Puritan black in a new perspective, doesn't it?
books color ethical fashion