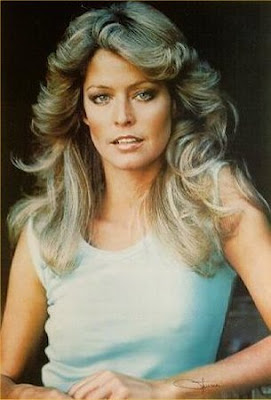 Aside from very 1950s hair, I don't know how Catherine Horwood, author of Worst Fashions, expects people to cover their heads. The end of her book included several hairstyles she thinks no one should have.

Not surprisingly, Horwood frowns on extreme styles like mohawks and unnatural colors. My husband once had blue hair, so I'm not with the author on this one. Other looks she considers extreme are primarily African-American such as the afro, cornrows and dreadlocks. This seems so off to me as the kinky curls of African hair are difficult to care for, and these styles can bring more freedom than, say, a straightened look.

Horwood's primary issue regarding former styles for females is big, long feathered hair, a.k.a. The Farrah. I guess something about the softness and the way the curls accent the face really peeves her. Strangely, this fashion critic had nothing to say about the beehive.

Men get the worst of things. Shaved heads and crew cuts are out. (What will state troopers do?!) Long hair or even anything long enough to spike or slick back is a no no. (As with any style, you have to be willing to maintain it. So while some guys just look scuzzy with a ponytail, Johnny Depp and Antonio Banderas rocked it in the 1990s.) Horwood also considers curly hair silly, but if she's against head shaving, what are the Justin Timberlakes of the world supposed to do? Her ire is not limited to your heads, as she despises sideburns and unironic mustaches as well. (My dad rocked both in the 70s. Burt Reynolds was just always trying to keep up.) So, what are men supposed to do with their hair?

If you've been thinking of doing something new, go for it. Especially if you're in college. Don't let the fear of looking silly or dated bother you. Even the worst cut will have grown out enough in a few weeks to do something else with it. Even when I've hated the result of my scissor wars, everyone around me has adored it. Dread it. Dye it. Chop it off. Hair can have a huge impact on your over all look, but in the end, it grows back.
books hair menswear