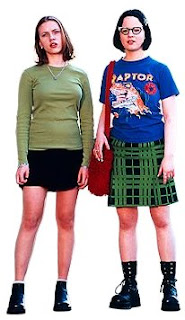 A few weeks ago, Jael Paris and I watched Ghost World. We knew it had inspired the Luella SS08 Collection, but I don't think we expected it to be as good of a fashion film as it was.

The clothing in Ghost World really added to the story and growth of the character. The outfits weren't strange for the sake of strange. The character of Enid (Thora Birch) wore clothing that really expressed where she was at that moment, and since the film is about growing up, it offers a lot variety in the clothing. 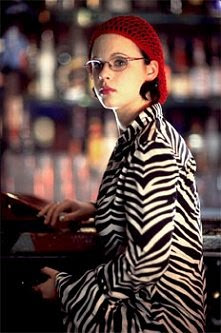 She wore bold print vintage dresses toward the beginning in clear contrast to her classmates' typical high school garb. 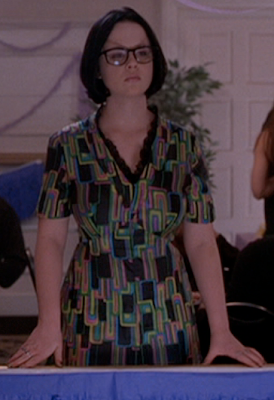 I love this waitress ensemble with the leopard print skirt and feather headband. The character has a lot of fun putting together her outfits. She not afraid to play with costume-like pieces in her outfits. 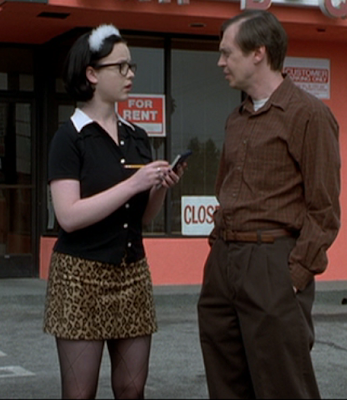 Her rebellious, and somewhat iconic, outfit got poor reviews from her friends, and she quickly changed it. But she clearly needed to try it and had the guts to do it. 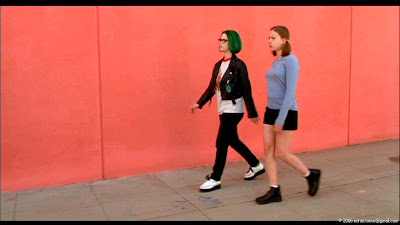 Enid also wasn't trying to achieve the perfect look for her figure. She looked awesome, but her skirts were too short for her body type according to most conventional fashion sources. Like Jael talked about earlier, Enid throws off the conventions of an hourglass figure in this boxy green coat and red mini. She didn't try to look taller or slimmer. 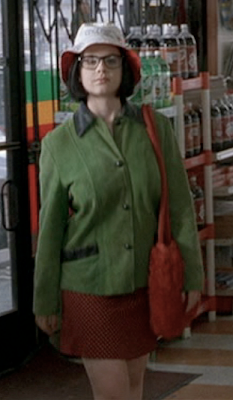 At one point Enid tries to sell some of her clothes in a yard sale to make money. She refuses to sell to most people and adds this sparkle tank to her outfit during her yard sale. Her clothes are an important part of her. 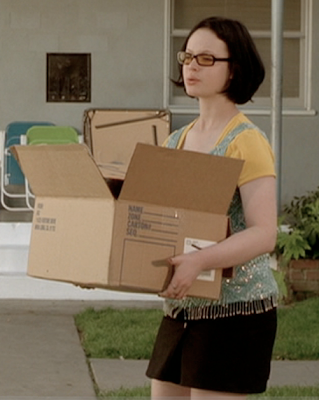 Enid also goes for an almost monochromatic look with printed tights (hard to do). She doesn't play by traditional fashion rules at all and adds a heavy pair of boots. 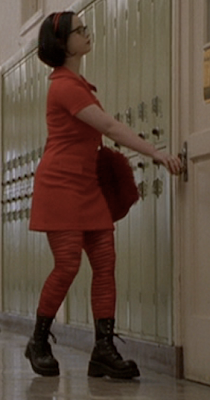 In the end, Enid moves on in an outfit that is sensible without straying from her signature style. 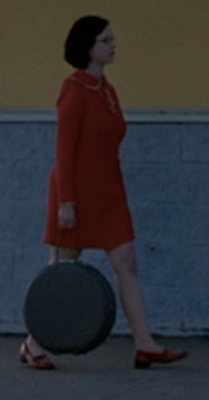 Do you have clothing that represents a moment or turning point in your life? Did you have a signature rebellion look? How has your style grown with you?
designer icons inspirations

Anonymous said…
I stumbled upon this little air-headed assessment of the clothes worn by Thora Birch as the character of Enid in the film "Ghost World" and laughed my head off for two reasons.

1. The film is not about fashion at all. It's about existential angst. To write your smelly little fashion blog about it sullies the greatness of the film.

2. Her skirts were not too short for her. And who're you to have precidence over that anyway? She was chosen for the film because she is an amazing actress, not because she wanted to wear quirky clothes for the fuck of it.
December 30, 2009 at 4:20 PM

Jael Paris said…
Let me clarify. We do not think this movie is about fashion; we think the costume department did an excellent job communicating Enid's personality with her clothing.

Furthermore, we said her skirts were too short for fashion's conventional concept of body types. We happen to like that she gives the finger to that as fashion's idea of body types is unrealistic.

Finally, take a deep breath and read for content if you're going to start throwing insults.
January 2, 2010 at 10:44 AM

Michael Alexander said…
The costumes were used quite clearly and brilliantly by the production team as a kind of visual soundtrack. The outfits would fit not only her mood or attitude in any given scene, but how others dressed around her gave you a sense of how comfortable she was/wasn't in her life... early on, ScarJo follows her style, yet Martha Stewarts by the end.

This film is like fashion the way American Psycho was... it plays an important part in the ambiance of the film.
July 22, 2010 at 6:17 PM

Vicki said…
Two things strike me as entertaining here in the comments section. One is that it appears there are people who do not think that clothing choices play any part in a visual art form such as film, and the other is that people think 'smelly' is a particularly stinging insult. And yet, it is we who are accused of being air-headed...

Melanie said…
It's been a while since I've read the comic book, but as I recall Enid dressed fairly plainly (except for the occasional costume piece). also, since the comic was in black and white (or blue and white), there wasn't a lot of colour to her ensembles either.

The fact that she dressed with so much colour and character in the movie, feels rather comic book-y, even though it isn't how she dressed in the comic books. It feels like the spirit of the original medium has been captured and honoured, and I really like that.

KS said…
I loved the clothing in this film. I'm a nerd but not a Ghost World reader. I also really felt the clothing used for the characters said volumes about them. It absolutely would not have been the same, or as impactful, without them.
I know this thread is old now, but GW remains an important film IMHO, and so I felt it worth my time to chime in. Can't see why ppl got so upset about your article. I loved it. Just wish more in depth. I could not take my eyes off the characters in this movie - and not just due to the perfect casting, but the wardrobe. Thank you for writing about it! Cheers -
April 7, 2013 at 5:26 PM