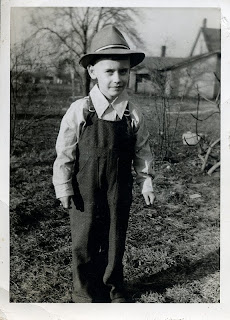 People often ask if my sense of style came from my mother. In all honesty, I was destined to love clothes from both sides of the gene pool. In honor of Father's Day this coming Sunday, here's a story of my dad's relationship with getting dressed.

My dad's sense of style evolved from two things: his childhood in southern Indiana during the Depression through WWII and his deep love for his Uncle Will.

Dad was the youngest of eight, and his clothes were either hand-me-down or stitched together 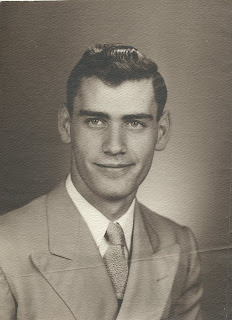 from other clothes. "New" was a completely foreign concept. Working on a farm, Dad had to wear jeans everyday since they were the best fabric for such heavy work. He was thrilled on days (like Sunday) when he could wear "real clothes." (Also, only the poor kids wore sneakers for everything. They just didn't protect the feet the way leather shoes did.)

Uncle Will was already old when Dad was born. He was a dandy: three-piece suit, gold watch and chain, slicked hair, patent shoes. He wore that everyday. More important, he always talked to my Dad at great length while other people ignored him. No doubt the combination of Uncle Will's kindness and clothing was seared into my father's mind. 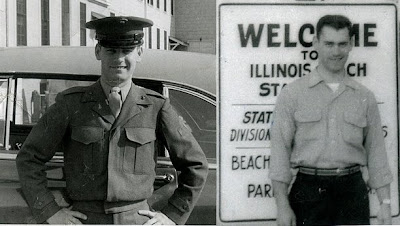 Dad's time in the Marines only made him more particular about his clothes, particularly in regard to cut and wrinkles. He hated it when I'd get dressed up and hadn't bothered to press my clothes. It also drove him nuts when my pants dragged on the floor. (We're a family of shorties.) 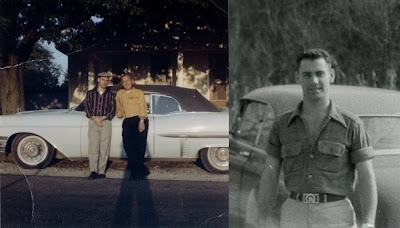 When he left the service in 1957, Dad dressed far more laid back. (Hat alert!) According to today's standards, he was still sort of dressed up. He never really adopted jeans, tee shirts or sneakers for anything other than yard work. 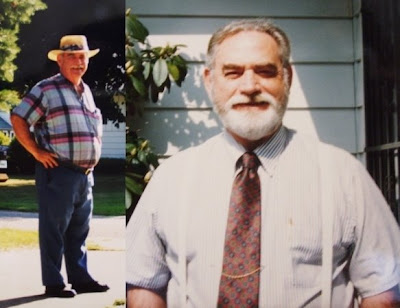 Dad developed his standard weekly wear of slacks and a patterned button down shirt. (This shirt always had to have a chest pocket for his glasses, calculator and business cards.) Being a big guy, Dad took to suspenders instead of belts (though we'd tease him about having security issues when he wore both.) Hat alert! 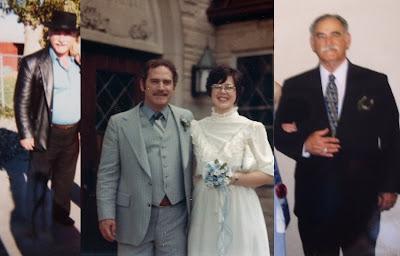 When he wanted to dress up, Dad would either pick a non-patterned shirt to wear with his leather jacket (hat alert!) or he'd go all out in a suit. I like the way his pocket square and tie are the same gold, green and purple mix. I also think this picture demonstrates nicely how a well-made suit can flatter even a portly build.

Unfortunately, I didn't realize Dad had this relationship with clothing until after he passed away. I think he'd love to know some of the things I've learned about the cutting of suits and trends in body image. I like to imagine him pecking away at the keyboard reading Fashion Me Fabulous so we could stay in touch.
icons inspirations menswear style

Jean Paul Gaultier's runway promoted one of my favorite fashion looks: pinstripes with a delicate, feminine print. He had high-waisted pants, suspenders, lingerie elements, lace, sheer fabrics, softly geometric designs, and monochrome dominated, much to my glee. His menswear-inspired looks are a testament to how graceful the style can be.
Christian Lacroix also paid homage to menswear with pieces inspired by matadors and soldiers. The complete collection wasn't cohesive, but even the breaks from theme were lovely. It's hard to argue with so many colors, ruffles and embroidery. Plus, I want that polka dot coat!