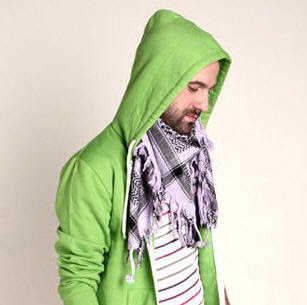 Despite the gloom and doom prophesied in my last article concerning menswear , I promised three sartorial 'messiahs' to cheer the bleak face of guy's clothing for the spring months... and hook, crook or something else that rhymes with "ook" we're going to finally get to them... one at a time.

Although the scarf has enjoyed a resurgence, as noted months ago as the freezing and bitter touch of winter last drove us indoors, most men pack them back in their closets come the first hint of warm weather; now though, thanks to an oft ignored segment of the fashion industry, neck wear has become spring and summer chic once again.
Rising both out of the long history of European style, and a 'bandito' bandanna fling in of all things the skater "punk" scene, scarves are all over the place for guys, and in styles that even 5 years ago would have been considered too over the top.

bsidiary D-Tox) sell simple pre-tied (and in some cases, knitted) bandannas, they share a common aesthetic shift to Middle Eastern design patterns with the more upscale boutiques and chains. Varying in price and quality, these scarves are virtually unrecognizable from each other, providing guys with a "youthful", and more importantly, accessibly cheap way of looking amazing as spring blooms.