The Hunt For a New Scent

By Jael Paris - February 14, 2008
I've been wearing Heavenly by Victoria's Secret since high school, and lately it just smells very high school, evoking memories of awkward crushes and terrifying embarrassment. This weekend I went to Macy's to smell what I could smell. I tend to like soft woodsy and spicy smells. Of course, most of what I found was floral and fruity.

Major nos were Tendre by Prada which smelled just like a pungent, sweaty old lady. Juicy Couture's namesake scent (left) reminded me of 16-year-olds who wear hot pink and dress up their dogs. Jessica McClintock settled into a nice powder smell but it was sharp and adolescent for at least an hour. Vera Wang's Princess smelled sweet like cotton candy. 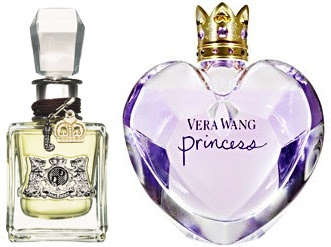 If you like fruity, apple is the big thing in perfumes right now. DKNY's Be Delicious Big Apple was, appropriately like a tart green apple, while Nina Ricci's namesake scent (left) was more like a sweet candy apple. Estee Lauder's Pleasures Exotic smelled like a nice but unexotic pear, not what their ad copy says. Their Beyond Paradise initially smelled of pear as well, but mellowed into a tropical breeze. It was one of my favorites, soft and subtle. Another fruity perfume I surprisingly loved was the powdery, fruit punchy L. by Gwen Stafani. 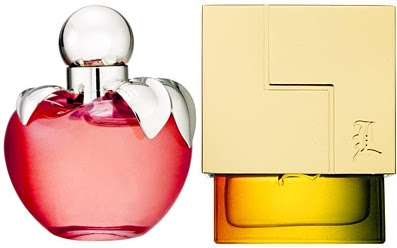 On the flowery end of things, Euphoria Blossom by Calvin Klein (left) was a bouquet complete with greens. Marc Jacobs' Daisy had the expected smell with a hint of grapefruit. Vera Wang's Truly Pink was a floral gumdrop; the flowers used were soft in real life, but it smelled too sweet. 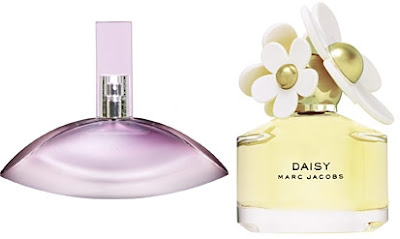 Among the other perfumes Jean Paul Gaultier's signature Classique (left) had a chocolate rum scent, a perfect match to it's lingerie bottle. Burberry (right) is such a classic company, and London's sandalwood musk with florals was a nice but un-old ladyish match. Calvin Klein's original Euphoria reminded me of incense and spices tempered with cream. Organza by Givenchy has good and bad tones which add up to the mental image of and old smoker who loves to pop red hots. 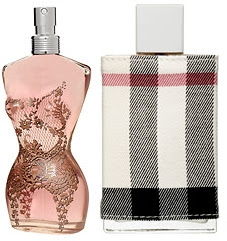 The perfume I will most likely buy is Code Pour Femme by Armani. It smelled gingery and woodsy, and I've loved smelling it all day long. Plus, it comes in an atomizer, and that's too fun to pass up! 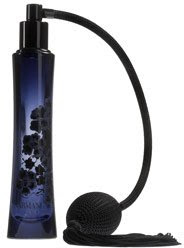 becca said…
I've been thinking it's time to move on from the Victoria Secret body sprays too. I still like the fruity ones for summer, but I want something else for the rest of the year.

Jael Paris said…
Take a little tupperware container of coffee. The smell will keep your nose from being overloaded.
February 14, 2008 at 8:53 PM