Two things you have to remember in men’s fashion, straight off:

1. You will never look like Cary Grant. For many, he is the ultimate example of masculine style, but there was more Cary Grant going on than his clothes.

2. Nearly everything you wear, designed after the late eighties, may have been designed for the frame of an 11 year old boy, which is also equivalent to a really tall pre-pubescent girl.

The attitude towards men’s fashion has changed dramatically over the last fifty years of the twentieth century and into the present day. While once every man wore a suit of some regard daily to blend in, today’s options are meant to allow the wearer to stand out and express themselves, freeing the art of style, if such a thing can be named, to become more masculine.

The suit itself, once a symbol of conformity, practically a social uniform has since become one of the primary outlines to follow in crafting a cool and stylish look. Variations for the 2008 spring line up promise to continue this trend, as designers such as McQueen, Bottega Veneta and Versace embrace the slim and trimmed down style of the suit. Of course, not all of us, this humbly fashionable dude included, can afford to replace our wardrobe on a quarterly basis with European designer looks. But that’s something guys have yet to have caught onto when it comes to fashion, even though it necessitates the two basic rules applied above. Fashion shows and designer styles are only meant to inspire for the most part. Sure, a real Paul Smith geek-chic suit would make the headliner on any collection, but there are few things more boring, and unnecessarily expensive, than unrelentingly clinging to a brand design. 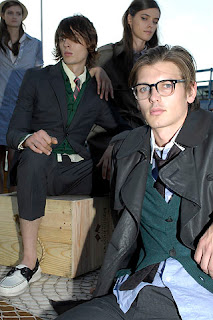 Rather, take what you see and allow yourself to experiment with style. Any store can be relied upon typically to carry something of worth. A relatively cheap jacket from the design-bargain store Internationale, who focus primarily on once-wear club clothing and cheap tuxedos, can liven up the energy and even the worth of an outfit. Add a $20 vest, a $10 dress-shirt or t-shirt, and a pair of jeans can make a surprisingly well-put-together ensemble, unique in form but familiar in design to even the hottest walkway styles.

Rachel said…
This is so true. I love a suit jacket paired with jeans and a tee shirt on a guy. Somehow it manages to be classy and edgy all at once, and makes dressing up your everyday wardrobe easy!
January 28, 2008 at 5:05 PM