By becca - January 25, 2008
Couture gowns often look like something from a fairytale or, at least, from a fairytale life. The gowns conjure up a dream world based on a simple question, “Where would I wear that?” I, obviously, wouldn't wear that anywhere considering I have no occasion that would require such a dress. However, part of the fun of couture is imagining where I would wear the dress, which of course requires conjuring up an entire life (and maybe even a Prince Charming) to go along with the dress and event. 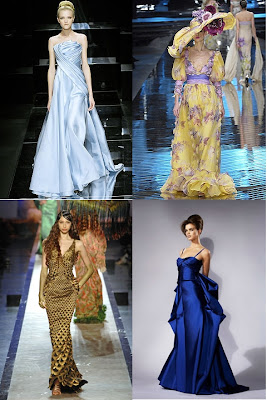 For example, the pale blue Elie Saab gown would be for my princess ball. (It's a day dream I can be a princess). The floral Valentino dress with the pompous hat could only be worn to some sort of parade in an old movie. The gold mermaid dress from Jean Paul Gaultier would be a knock-out (and a stand-out) at an elegant party. The rich, deep blue of the Versace gown would be an amazing red carpet pick (for that Oscar I'm totally going to win).

How would you wear couture in your make-believe life?
designer dresses fashion shows

Jael Paris said…
I going to win an Oscar too! For that, Givenchy. For sitting around and being an artist's muse, it's gotta be Dior. For all other occasions, a classic Chanel suit.
January 25, 2008 at 6:27 AM