Bravo! Project Runway is Back. 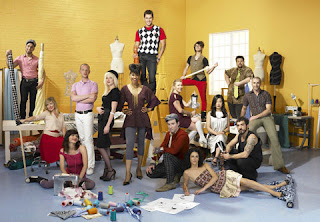 Bravo is providing some seriously fashionable programming.
Project Runway came back tonight with a bang. The competition is even tougher this year. The designers have more fashion experience and exposure than some of the past contestants. Many of them are working fashion or costume designers, former models, or otherwise connected to the worlds of fashion and art. They have varied interests from swimming to making 30 foot marionettes. In fact, Tim Gunn said he was sure this was the strongest group yet. The stakes are higher too. The winning designer will get to sell their designs on Bluefly.com, a new sponsor of the show.

In stead of re-purposing the clothes they were wearing or making clothing out of garbage, the designers were challenged to create a garment that expressed who they were. They used exquisite fabrics donated by Mood. Of course hey had to race across a large yard to three tents and grab all the fabric they could. What fun would it be if they didn't have to do something ridiculous.

There were a few standout, both good and bad, but sleepers may come out in the middle of the season. I'll be posting my thoughts on the designers in a later post.

Tomorrow night Bravo is making sure we get our Tim Gunn fix with a new episode of “Tim Gunn's Guide to Style.”

Also, Bravo's upcoming show “Make Me a Supermodel” is letting you pick your favorite models. Will this be another America's Next Top Model or will these models see some real runways?

Bravo, I applaud you for such posh programing.
Project Runway TV + Film